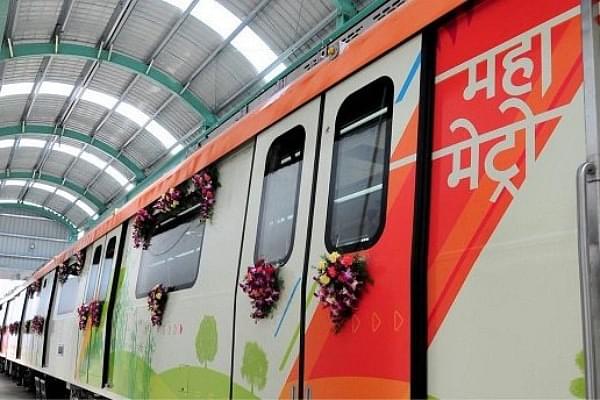 On Sunday (30 October) , Nagpur Metro conducted its trial run plying at a speed of 90 kmph between the Airport and the Khapri station. Maharashtra Metro’s Managing Director Dr Brijesh Dikshit and other senior Metro officials were also part of the trial run, reported Nagpur Today.

”You have all been part of a historic event today! New rails, new station and new train – all being tried for the first time together at peak condition. The following generations of Nagpurians will get to ride Metro daily, but they will not get to be part of this historic trial run”, Dikshit said.

The trial runs of the “fully loaded” metro at 90 kmph were given a go-ahead after a 12- member team of Research Designs and Standards Organization (RDSO), Lucknow, completed the oscillation trials on the Metro, which were going on for five days.

A four-member team from RDSO was also present on-board the train doing live testing of the vibrations in the train and collecting data for subsequent analyses. After the RDSO analyses the data, only then the Nagpur Metro will get permission to speed up to 90 kmph on a routine basis. As of now, Nagpur Metro has permission for a maximum speed of 25 kmph.

Various systems and subsystems of the train were tested during the trial run with a simulated weight of 63 tonnes using cement bags to make the train “fully loaded”. The train will carry 970 passengers in its three coaches when running on full capacity.

The trial run was declared “very successful” by Deputy Director of RDSO, S S Parvan. “Up to a Ride Index of 3 is considered safe and comfortable. Nagpur metro touched only 2.2 today” he said.

During the trial run, the train completed a distance of 5 km from Airport south to Khapri in under five minutes. A fully operational Metro from Khapri to Sitaburdi will take about 18 minutes and with stoppages included, it will be taking a maximum of 30 minutes, a huge relief for daily commuters on the route.

Other stations will be added to the present route in a phased manner.