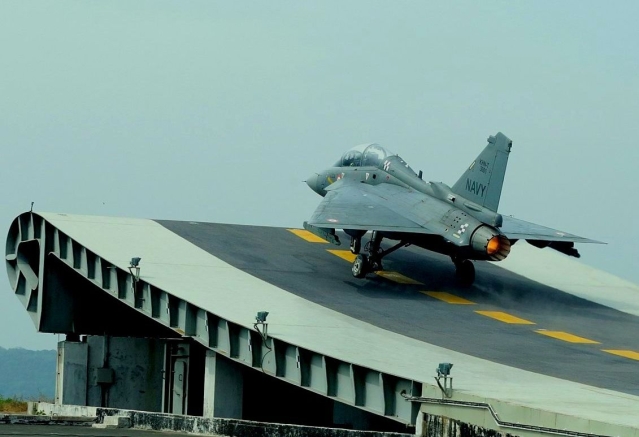 The Naval variant of India’s light combat aircraft (LCA) Tejas has achieved a major milestone in its flight operations after completing a full sequence of launch and arrested recovery in a single sortie, Livefist Defence has reported.

As per a statement by the Defence Ministry, the LCA Tejas launched off its ski jump at 4.21 PM on 29 September and was trapped 10 minutes later at the arrested landing site.

The test which took place at Indian Navy’s offshore facility at INS Hansa in Goa, simulated conditions which are similar to seaborne aircraft carriers.

Indian Navy had earlier achieved arrested landing and ski jump takeoff individually but it was the first time the aircraft performed both these acts during a single sortie.

The ski jump was first performed by the aircraft in 2014 and the arrested landing was first successfully performed just two weeks ago.

The latest success is expected to bolster the LCA Naval program in its quest to become combat ready.