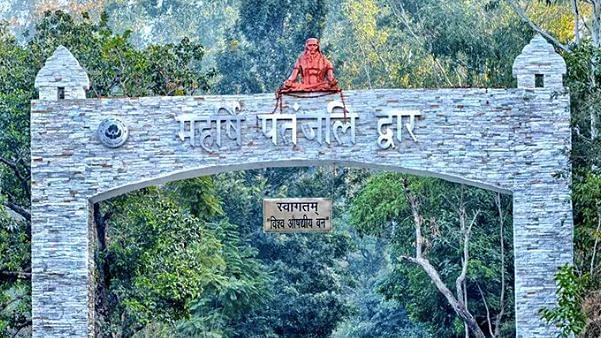 Entrance to the forest.

Haryana Chief Minister Manohar Lal Khattar today (20 December) inaugurated the World Herbal Forest Project at Morni Hill, 45 kilometres from Chandigarh, Business Standard has reported. The project has been developed as a collaboration between Patanjali and the state government.

The project covers over 52,000 acres of land in Morni Hills and is aimed at developing a forest of medicinal plants which will provide a huge boost to the Ayurvedic industry across the country. About 25 different varieties of plants found in the country will be housed in this forest. 50,000 plants each of 20 medicinal varieties are being sown in the first phase.

The project is expected to turn Haryana into a global tourist destination. The project will also help build a herbs based industrial zone in the surrounding areas and play an instrumental role in mass employment generation.

Patanjali has already completed work worth crores for the project to plant over 1000 herbal and medicinal plants in the area.

The scale and the manner in which the project is being implemented has already helped it emerge as a model for environmental conservation and climate control that others can follow.

Speaking to media, Khattar said, “I am happy that we have now so many types of medicinal plants growing in our state. Here, we have at present 53 types of plants which can be used by the locals for treating different kinds of diseases. This forest will also help the people to gain economic benefits.”

Yoga guru Ramdev lauded the initiative taken by the Haryana government and stated, “Patanjali in collaboration with other ministries will soon form a Herbal Corporation which will look into the functioning of this new World Herbal Forest.”

Work on the project had commenced after a Memorandum of Understanding was signed January last year between the Haryana government and Patanjali Anusandhan Sansthan Divya Yog Mandir Trust based in Haridwar.

A joint task force of the Haryana Forest Department, Patanjali Yogpeeth, Haridwar, and local people of Morni was constituted to oversee smooth running of the Herbal Forest. This committee was entrusted with preparing an action plan to get the project on the world map, come up with a list of the plants currently in the area and also determine their supervision level. A team of scientists from Patanjali visited Morni and helped in plantation of different varieties of plants in different areas.