No Need To Clarify 3 November Order On Tis Hazari Police-Lawyers Clash As It Is Self Explanatory: Delhi HC 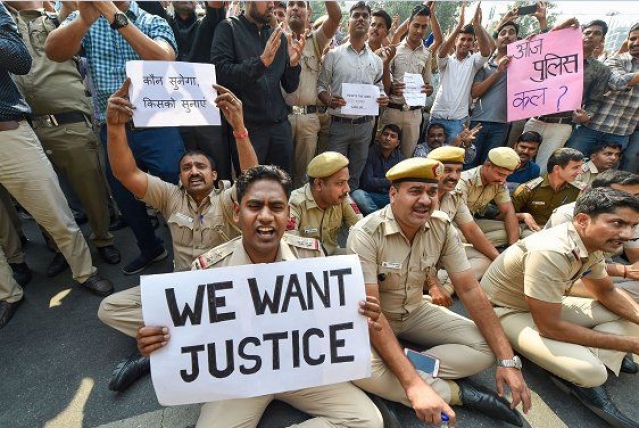 The Delhi High Court on Wednesday (6 November) said that its 3 November order directing no coercive steps against the lawyers against whom FIRs were registered in the aftermath of Tis Hazari court violence on 2 November is "self-explanatory and needs no clarification".

In the meantime, Delhi Police Commissioner Amulya Patnaik issued a statement to police personnel about the developments in the high court. "We have got relief from high court after we filed a review petition," he said.

Patnaik also asked the police personnel not to get provoked by anything and to maintain the police service integrity, saying that he was concerned about their grievances.

The high court order was passed by a division bench presided over by Chief Justice D N Patel and Justice C Hari Shankar on a plea filed by the Home Ministry, seeking clarification on the court's earlier order.

The Ministry of Home Affairs, which directly controls Delhi Police, sought clarification as to whether protection was extended only with respect to the two FIRs registered on 2 November after the Tis Hazari violence and not the subsequent events.

During the course of hearing, the bench heard another application filed by the Delhi Police seeking expunction of certain observations made by the court in para 15 of its 3 November order.

These observations pertain to the court's observations on the conduct of Delhi Police ASIs Harender Singh and Sanjay Singh on 2 November, the day of the incident.

After hearing both the applications, the bench clarified, "The observations given by the court on 3 November will not have any bearing on the ongoing judicial inquiry. Both the applications by MHA and Delhi Police stand disposed of."

The day also witnessed lawyers' protests across all the courts in Delhi, stopping routine court works. Even litigants were not allowed to enter into the court premises.

Mahavir Sharma, Chairman of the Coordination Committee of All District Bar Association in Delhi, said that the protests will continue on Thursday (7 November) as well.

"Abstinence from work in all Delhi district courts will continue tomorrow. In order to ensure success of the movement, all are requested to continue the movement peacefully. Litigants will be permitted to have access to the court rooms."