“No Sikh will remain in Nankana”: Pakistani Muslim Mob Pelts Stone At Nankana Sahib Gurdwara, Threaten To Destroy It 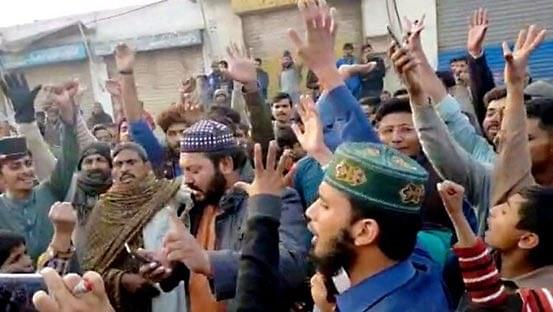 The mob was led by the family of Mohammad Hassan, the boy who allegedly abducted and converted Sikh girl Jagjit Kaur, who is the daughter of the gurdwara's granthi.

The protesters were raising slogans that they will destroy the gurdwara and change the name of the place from Nankana Sahib to Ghulaman-e-Mustafa.

I urge @ImranKhanPTI Ji to take immediate action on such communal incidents that are increasing the insecurity in the minds of Sikhs of Pak@thetribunechd @PTI_News pic.twitter.com/IlxxBjhpO2

India issued a statement strongly condemning the mob violence at Gurdwara Nankana Sahib in Pakistan this evening after reports emerged that hundreds of angry people surrounded the iconic gurdwara and threw stones, with devotees inside. Nankana Sahib is the birth place of Guru Nanak, the founder of Sikhism.

"India strongly condemns these wanton acts of destruction and desecration of the holy place. We call upon the Government of Pakistan to take immediate steps to ensure the safety, security, and welfare of the members of the Sikh community," the government said in a statement.

India strongly condemns vandalism at the holy Nankana Sahib Gurudwara in Pakistan and calls upon Pakistan to take immediate steps to ensure the safety, security and well being of the Sikh community. https://t.co/Nx1317xQ1T pic.twitter.com/dFykWJa2xP