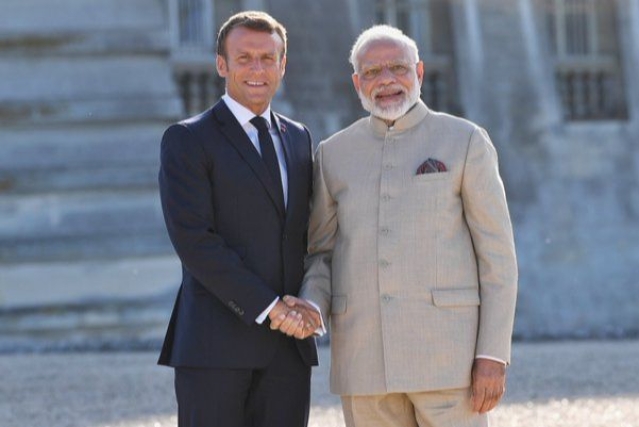 Prime Minister Narendra Modi on the first leg of his three-nation visit arrived in France on Thursday (22 August). During his visit to France, he held marathon one-on-one talks with French President Emmanuel Marcron, reports Times of India.

During their 90-minute long one-on-one meeting, the two leaders reviewed the entire gamut of the dynamic and multi-faceted bilateral relationship. After the one-on-one interaction, delegation-level talks were held following which four memorandum of understandings (MoUs) were signed.

In a joint statement after the meeting, President Macron said that PM Modi apprised him about India’s decision on Jammu and Kashmir and that it is in their sovereignty.

“I told him that India and Pakistan will have to find a solution to the issue and no third party should interfere or incite violence in the region," Macron said.

The French President emphasised on maintaining peace in the region and protection of people’s rights.

"I will also speak to Pakistan Prime Minister after a few days and tell him that the talks should be held bilaterally," Macron added.

He also informed that first of the 36 Rafale fighter jets will be delivered to India next month.

Speaking after Macron, Prime Minister Modi said that Indo-French relationship is not based on any selfishness, but on solid ideals of ‘Liberty, Equality and Fraternity’. He said both the countries would increase their cooperation in the field of counter terrorism and security.

"Both our countries are constantly facing terrorism. We thank President Macron for the valuable support that France has received in combating cross-border terrorism. We intend to broaden cooperation on security and counter-terrorism," Modi added.