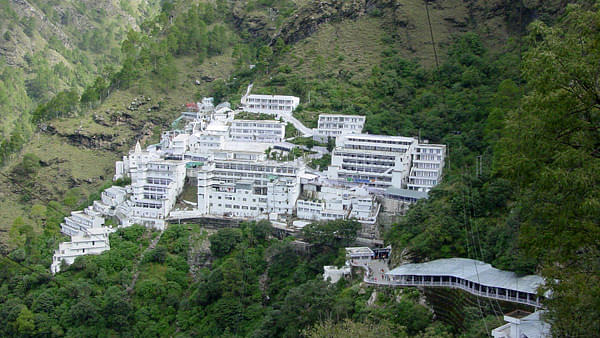 The pilgrims visiting Mata Vaishno Devi shrine will now get enhanced free group accidental insurance cover. The Shri Mata Vaishno Devi Shrine Board (SMVDSB) in its sixty-third meeting in Raj Bhavan in Srinagar, under the chairmanship of Jammu and Kashmir Governor Satyapal Malik had approved the enhancement on Sunday (14 October), The New Indian Express has reported.

“The Shrine Board approved enhancement of Group accidental insurance cover for the pilgrims. The accidental cover extended to each pilgrim free of cost shall now be Rs 5 lakh instead of Rs 3 lakh for those aged five and above, and Rs 3 lakh for pilgrims below 5 years of age up from Rs 1 lakh at present," said a board’s spokesman.

Additional cover to pilgrims availing the upcoming passenger ropeway between Bhawan and Bhairon Ghati has been approved, said the spokesman.

“This cover shall be in addition to the accidental cover available to each yatri once he/she collects the yatra slip and commences the pilgrimage,” he said.

The new premium will be borne by the board as currently it takes care of the premium on insurance cover.

A medical support policy has also been approved for public trauma victims’ treatments. Rs 2 lakh medical assistance will be provided to each patient.

A new medical facility will also be established at Lambi Keri to cater to medical exigencies in the Adhkuwar-Sanjichhat sector.