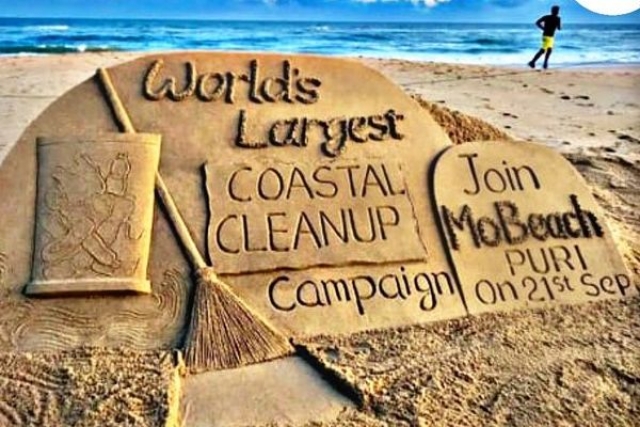 A sand art about the evert by Sudarshan Pattnaik. (via Twitter)

A mega cleanliness drive under the banner of 'Mo Beach' cleaning initiative was organised at Odisha's Puri beach to mark the International Coastal Cleanup Day on Saturday (21 September).

The Puri administration claimed that it is the world's largest coastal clean-up drive that aims to sensitise people about the importance of clean beaches.

More than 10,000 volunteers participated in the drive at several places along the district coast.

“Puri is the pride of our country and I am happy to be a part of world's mega clean-up drive here at the sea beach,” said Jammwal.

“It is a great day for us as thousands came forward to clean up the beach at Puri,” said internationally acclaimed sand artist Sudarsan Pattnaik.

The volunteers took an oath to protect the oceans and beaches by the simple mantra of Reduce, Reuse and Recycle of waste, especially plastic waste. Another intriguing activity at the beach was a life-size human chain formation of Mo Beach Puri typography.

Students and volunteers were found joining in large numbers to clean beaches near Ramachandi Temple, Konark, and Astarang area along the coastline across the district.

It was a heart-warming picture to see the voluntary participation of hundreds of people who have been motivated to stop unnecessary littering and also extended help towards the cleaning drive.