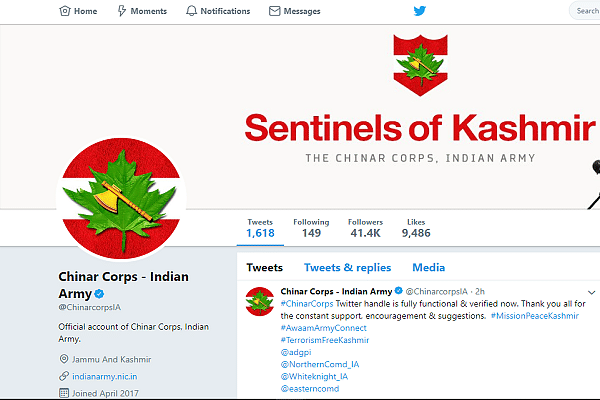 The account of Chinar Corps after being restored. (@ChinarcorpsIA/Twitter)

Twitter today (7 June) temporarily suspended the official handle of the Indian Army’s Srinagar-based 15 Corps, also known as Chinar Corps, reports The Print. The account, @ChinarcorpsIA, was restored after an hour after media reports brought the issue to light.

The Chinar Corps is one of the most important corps of the Indian Army, tackling the insurgency in Jammu and Kashmir (J&K) as well as helping secure the Line-of-Control (LoC) with Pakistan-occupied-Kashmir (PoK).

For its part Twitter claimed that the suspension had occurred by mistake as part of an exercise targeting 1.8 million accounts but there may have been something else at play as well.

Apparently there was a large-scale organised attack on Twitter accounts of Indian security forces which was orchestrated by accounts run by the Pakistani military’s propaganda arm, ISPR; the targeted accounts were mass-reported.

Twitter itself is often accused of having an opaque process behind suspending accounts, particularly those of a right-wing inclination.