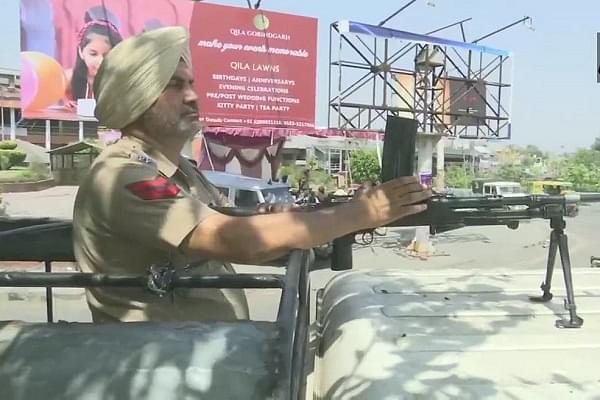 Security forces are on high alert across the city of Amritsar. (@ANI/Twitter)

Today (6 June) being the 35th anniversary of Operational Blue Star, slogans in support of Khalistan were raised within the Golden Temple complex at Amritsar by some men wearing t-shirts depicting the image of Sikh militant leader Jarnail Singh Bhindranwale, who was killed in the said operation, reports India Today.

Personnel belonging to the Shiromani Gurdwara Prabandhak Committee (SGPC) got into an altercation with the group of men, who were using the slogan ‘Khalistan Zindabad’.

The SGPC had already been on high alert over the possibility of any problematic incident at the Golden Temple; the committee had also been scrutinising details of devotees visiting the complex today.

Moreover, 3,000 security personnel have been placed across Amritsar in order to ensure that an atmosphere of peace is maintained. For the next five days, there is a prohibitory order against carrying weapons in the city, including sharp knives.

Security has also been heightened across entry and exit points to the city, while a number of check posts have been set up as well.