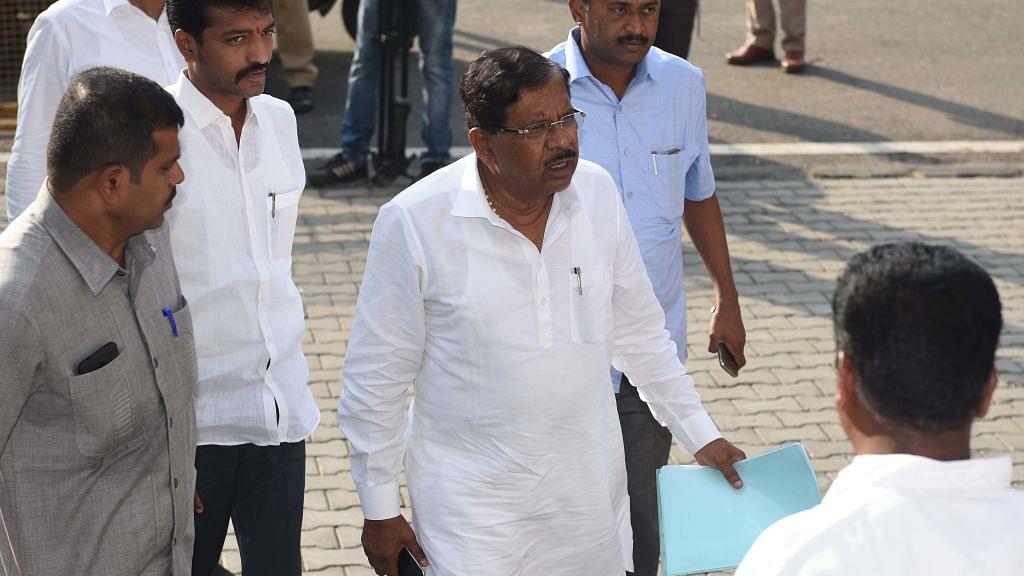 Rs 4-5 crore in cash was "seized" during raids by over 100 Income-Tax (I-T) Department sleuths on the premises of Karnataka Congress leaders G Parameshwara and R L Jalappa in Bengaluru and other places in the state, an informed source said here on Friday (11 October).

"Search and seize operations in 25-30 premises of Parameswhara and Jalappa are continuing since these began early on Thursday, for alleged tax evasion and non-disclosure of disproportionate assets from the educational institutions they run with relatives and friends," the source told IANS requesting anonymity.

About Rs 70 lakh in cash alone was reportedly found and seized from Parameshwara's residence in the city's upscale northwest suburb of Sadashivnagar.

Parameshwara, 68, was the Deputy Chief Minister in the 14-month-old JD (S)-Congress coalition government and former president of the party's state unit for over six years.

An I-T official, however, declined to confirm the seizure of cash and documents as the search operation was continuing and a statement will be issued after the exercise by the director-general of the investigation wing.

"Till the exercise is completed and seizures are valued, we cannot disclose them, as they will hamper the investigations. We may issue a statement after the operation is completed" the I-T official said.

Parameshwara and Jalappa, 93, together with their family and relatives, head a chain of higher education institutions, including medical, dental and engineering colleges in the state's southeast region.

"A team of sleuths has also questioned Parameshwara on the documents seized during the search and on the basis of the affidavits he filed in his tax returns and to the Election Commission for contesting in the 2018 assembly elections," the source pointed out.

Siddhartha group of institutions, run by Parameshwara and his family, have huge campuses and colleges at Nelamangala and Tumakuru, located in a radius of 40-70 km northwest of Bengaluru.

Similarly, Jalappa's group of educational institutions, including the Devaraj Urs Engineering and Medical colleges at Chikkabalapur and Kolar, both situated between 70-100 km east of Bengaluru.

"Raids are also underway in the residences of Jalappa's relative G H Nagaraj at Kolar, as he looks after the hefty donations collected by the group's medical and engineering colleges for admission from private students and non-resident Indians (NRIs), the source added.

According to department sources, the raids were in connection with the alleged irregularities in the accounts of the educational institutions, including the medical and engineering colleges run by the trusts headed Parameshwara and Jalappa.

Senior Congress leader and former cabinet minister D K Shivakumar was arrested in New Delhi on 4 September and has been remanded to judicial custody in the capital's Tihar Jail in connection with an alleged money laundering case and for tax evasion on properties worth crores amassed disproportionately to his known sources of income.

In a related development, the opposition party state unit president Dinesh Gundu Rao condemned the raids on Parameshwara and Jalappa and termed these as political vendetta by the ruling BJP government at the Centre and state.

"The raids only on leaders are a deliberate misuse of the central agencies like the I-T, ED (Enforcement Directorate) and the CBI to silence and hound the opposition parties and weaken public institutions," Rao told reporters here.

The home of Parameshwara's brother's son, Anand, and the Siddhartha Medical College were also searched. The college is run by a trust connected to the former minister.