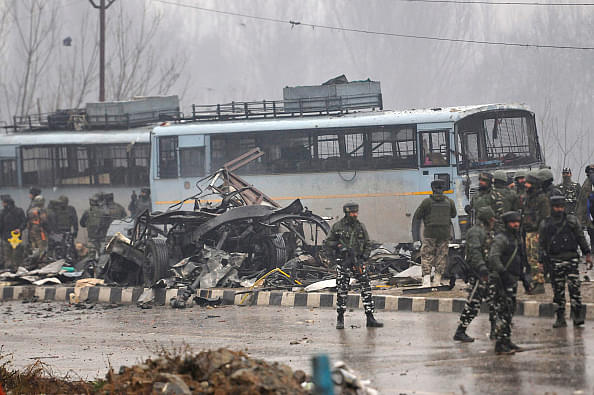 The security forces on Tuesday (18 June) gunned down two Jaish-e-Mohammad (JeM) terrorists, including one whose vehicle was used to carry out the blast in the Pulwama attack, in an encounter in Jammu and Kashmir’s Anantanag district, reports ANI.

"Two terrorists were killed and the bodies were retrieved from the site of encounter... As per the records available with police, both the killed terrorists were affiliated with proscribed terror outfit JeM and were wanted by law for their complicity in a series of terror crimes including attacking of security establishments and civilian atrocities," the J&K police said in a statement.

The encounter took place in Marhama village of Anantnag district in South Kashmir. According to the police, the slain terrorists, identified as Sajad Ahmad Bhat and Tawseef Ahmad Bhat, were both residents of Maharma and had links with JeM.

Sajad, according to the police records, was the owner of the vehicle which was used for carrying out the blast in Lethpora in Pulwama district killing 40 Central Reserve Police Force (CRPF) personnel.

"Sajad was wanted in Lethpora blast in which 40 CRPF personnel were martyred earlier this year. As per the material evidence collected during the course of the investigation, it was learnt that Maruti Eco vehicle used for carrying out the blast in Lethpora was owned by one Sajad Bhat of Marhama. As the news of Sajad's involvement spread, he escaped and joined proscribed terror outfit JeM," the police said, as reported by ANI.

As per the report, the police said that both the terrorists were involved in planning and executing a series of terror attacks.