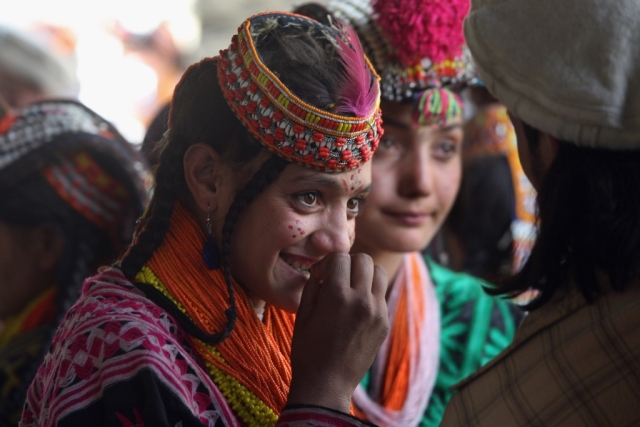 Girls and boys from the Kalash tribe during the Joshi spring festival on 15 May 2008 in the remote Chitral village of Rumbur in northwestern Pakistan. (John Moore/GettyImages)

Numbering less than 4,000 souls, the Kalash population inhabits just a few villages in the mountainous district of Chitral in Khyber Pakhtunkhwa in northern Pakistan. The community is easily distinguishable by their colourful clothing and their unique traditions in the overwhelmingly Muslim country.

The tribe is also well known for the distinctive physical features of its members, with many individuals having very light skin, hair and eye colour.

At the time of ‘Joshi’ an important Kalash festival marking the beginning of spring, domestic tourists swamp the mountains to lay their eyes on the distinctive celebrations of the tribe. However, some tourists come with more nefarious intentions which are fuelled by misinformation about the Kalash.

Some videos on Youtube make claims about the easy sexual availability of Kalash girls; how the tribe allows its female members to have sex with anyone of their choosing even in the presence of their husbands.

Many supposed tourists actually come to the region asking about where to find such Kalash girls. One Hotel manager stated that in his estimate 70 per cent of Pakistani tourists were young men who were asking questions to such ends.

The Kalash community itself denounces such misinformation being spread about it, which it says defames it. Posters have come up in Kalash villages telling tourists to not take people’s pictures without asking for permission and not harass any local women.

Another harrowing detail about the lives of the Kalash is that there have been a number reports of young women from the tribe being forcibly converted to Islam, a problem which affects almost all non-Muslim minorities in Pakistan.

Feeling threatened by outsiders, some of the Kalash have even stopped celebrating their own festivals publicly, and there is greater adoption of the veil among the tribe’s women due to fears of harassment.