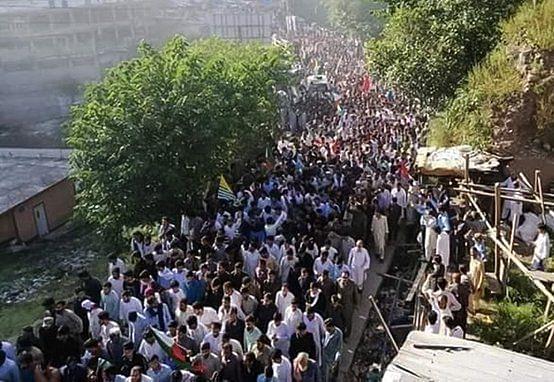 A snapshot from the video showing protests in PoK against Pakistan (Source: Twitter)

Pakistan says India is committing atrocities in Kashmir, but what is the establishment doing here? Just see. This is actual human rights violation,” a protester was quoted as saying by ANI. The protester said that the people of PoK were suffering.

A video went viral on social media showing the angry protesters shouting slogans against the Pakistan Army. “These atrocities must stop,” the people can be heard shouting as the Pakistani police baton-charges them. Some protesters can also be seen stone-pelting. A vehicle was also reportedly torched by them.

Allegations were raised that Pakistani military and police had committed brutality against the people in PoK, many of whom hid behind the bushes and took refuge in hillocks to save themselves from the shelling. At least 22 people were arrested after clashes broke out between authorities and demonstrators in PoK.

The citizens demanded that world community should see the atrocities committed by Pakistani establishment and issue be raised in international forums.