Pakistan: Punjab Education Board Bans KidsвҖҷ Mathematics Book For Including Image Of Pigs In A QuestionВ 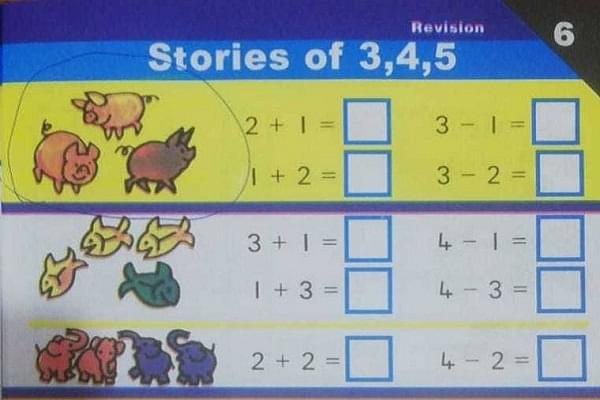 The offending image in the book (Pic via Naila Inayat)

The Punjab Curriculum and Textbook Board in a circular dated 20 May announced a ban on a mathematics book titled, вҖңInfant MathematicsвҖқ as it included a picture of pigs in one of the questions.

Punjab bansГӮВ childrenГўВҖВҷs mathematics book for it showed images of pigs in a problem-solving exercise. pic.twitter.com/uERcX7xFJn

As per a report by 24 News HD, the education board in its notification claimed that the book had been published without prior approval of the board.

The board added that it had come to light that the book was violating Section 10(5), of the Punjab Curriculum and Textbooks Board Act 2015.

The section states that any textbook material, вҖңlikely to be detrimental for examination or assessment purposes or which contains anything repugnant to the injunction of Islam or contrary, to the integrity, defence or security of Pakistan or any part of Pakistan,  public order or integrity cannot be approvedвҖқ.

The publishers of the book were as a result were asked to stop printing and distributing the book , failing which they can either be fined or jailed for up to two years.