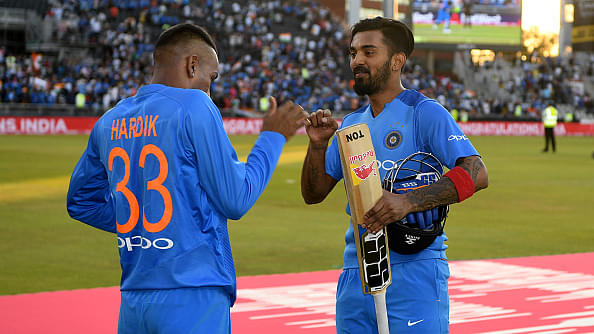 Indian all-rounder Hardik Pandya and batsman KL Rahul may face a two-ODI match ban after their controversial comments about women in the TV show ‘Koffee with Karan’, News 18 reports.

The chief of the BCCI's Committee of Administrators (CoA), Vinod Rai on Thursday (10 January) has recommended a two-match suspension for them. However, his colleague in the CoA Diana Edulji has brought up the issue to the legal cell of Board of Cricket in India (BCCI).

Pandya, who was responding to Karan Johar’s query of not asking women’s name in clubs, said, “I like to watch and observe how they (women) move. I'm little from the black side, so I need to see how they move.” Pandya also boasted about hooking up with multiple women as well as how open he is about it around his parents.

Since then, the all-rounder has gained unwanted attention after his comments were criticised by many as misogynistic and sexist.

The CoA, on Wednesday (9 January), issued a show cause notice to the players and gave them 24 hours to explain themselves. KL Rahul was more restrained of the two during the show. Pandya, since then has said that he is sincerely regretful and will not repeat the behaviour.

Rai said that the apology does not convince him. “I am not convinced with Hardik's explanation, and I have recommended a two-match ban for both players,” He also added that the final decision will be made once Diana gives her approval.

“Diana has sought legal opinion whether the duo can be banned. So, obviously, a decision will be taken once she gives her nod. As far as I am concerned, the comments were crass, in bad taste and unacceptable,” Rai adds.