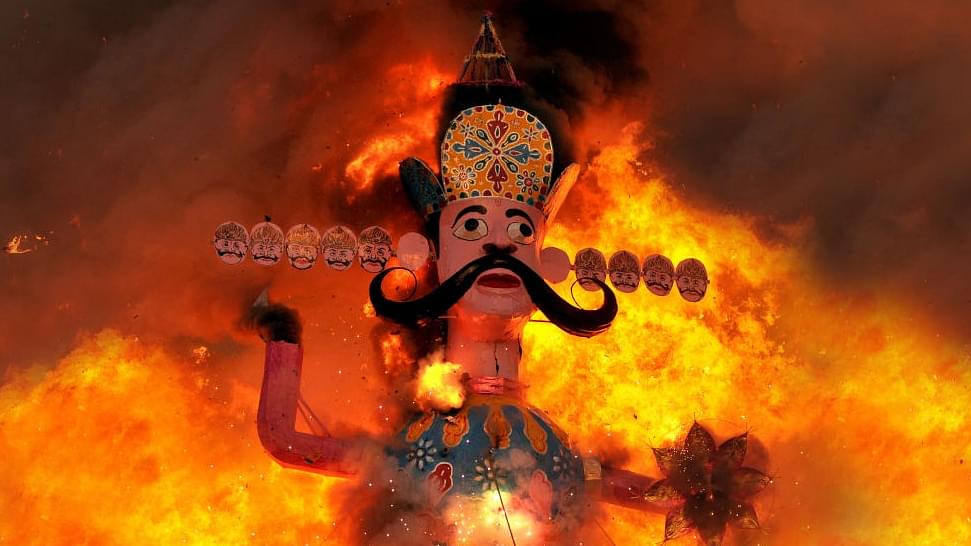 An effigy of Ravana goes up in flames marking the end of Dussehra. (Nitin Kanotra/Hindustan Times via Getty Images)

During Dussehra, India celebrates Lord Ram’s victory over Ravana by burning effigies. In Aurangabad, a group of men who claim to be ‘harassed’ by their wives are witnessing a change in tradition. They have now started to burn effigies of Surpanakha, the sister of Lanka’s demon king.

An organisation that claims to improve lives of those men who are harassed by their wives, Patni Pidit Purush Sanghatana did the aforementioned on Thursday, 18 October at a village called Karoli near Maharashtra’s Aurangabad.

The New Indian Express quoted PTI’s interview of the organisation’s founder Bharat Phulare as saying, “All the laws in India are against men and in favour of women. They are misusing it to harass their husbands and in-laws over petty issues. We condemn this tyranny against men in the nation. In a symbolic move, our organisation burnt an effigy of Surpanakha on the occasion of Dussehra last evening.”

According to Hindu mythology, it is Surpanakha who incited the conflict between Lord Ram and Ravana. The insult meted out to Ravana’s sister wasn’t tolerated by him which led him to kidnap Sita while he was disguised as a sage.

Quoting records from 2015, Phulare stated that those who commit suicide after marriage includes 74 per cent men and not the other way around. The organisation finds itself to be very critical of the #MeToo movement.