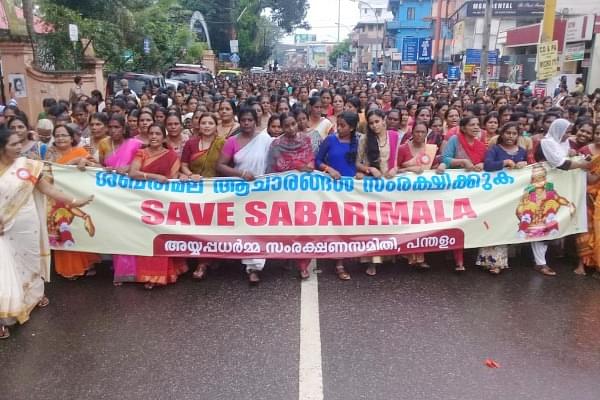 Kerala BJP has upped the ante calling for Kerala government to bring an ordinance, to restore pre-verdict situation in the Sabarimala temple, on lines of the ordinance brought out by Tamilnadu government in the Jallikattu case, Hindustan Times has reported.

Kerala CM Pinarayi Vijayan, on Monday (1 October), directed the Travancore Devasom Board (TDB) to take necessary steps in order to comply with the verdict of the Supreme Court (SC) in which the court has ordered to open the doors of temple for women of all ages.

Earlier, SC in a 4-1 majority decision has annulled the age-old tradition of the temple to not allow women between 10 to 50 years of age to worship in the temple.

The BJP leaders in the state have decided to inform the central leadership about the ‘pent up anger” in the state over the SC verdict and have called a meeting of broader Sangh Parivar affiliates on 8 October to mull future course of action on the verdict. The state unit of BJP is also planning to file a review petition regarding the verdict in the apex court.

“We really respect the Supreme Court verdict but at the same time, we can’t ignore feelings of crores of devotees. They are really upset. We want the government to promulgate an ordinance on the lines of Jallikattu in neighboring Tamil Nadu,” said BJP state president PS Sreedharan Pillai.

He criticised the Kerala government for the haste in the implementation of the verdict without due consultation with temple authorities and devotees’ bodies. He said that TDB president A Padmakumar had made it clear that his family’s women would not go to the temple.

“The TDB president’s words show prevailing mood. In Kerala, a majority of women have made it clear they have no plan to gatecrash the temple. Communists are known atheists and in the name of court, they are stifling popular sentiments. The government will face stiff resistance if it moves unilaterally,” said Pillai.

Twitter users have uploaded videos claiming to be of the protests against Sabarimala verdict by the highest court of the land.

Malayalis coming out to the streets to Save the Sabarimala temple.
Nothing is more important than our Temples & Devata.
Come to Pandalam, join us today 3 pm#SaveSabarimala #ReadytoWait
Swamy Saranam pic.twitter.com/yFY4knMvAa

Meanwhile, Kerala government is preparing for ensuring “smooth pilgrimage” of women to the temple. “We have taken a number of steps to ensure it.

Though there is no separate queue for women, seats will be reserved in buses and separate bathing ghats will be made for them. Women police will be deployed in large numbers at the hilltop and trekking sites,” said Devasom Minister Kadakampally Surendran.