Perfect Excuse For Your Next Holiday: India Has The Most Vacation-Deprived People In The World, Says Study 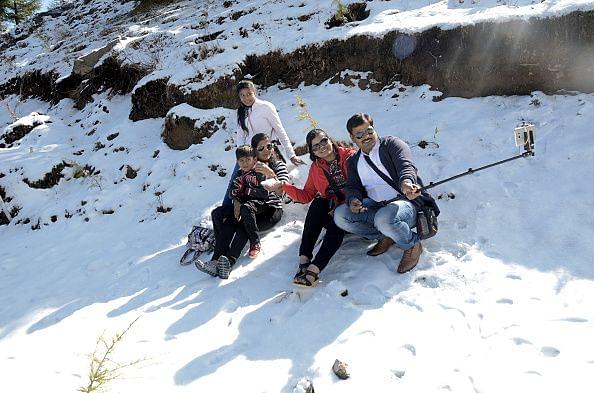 A Family on a vacation clicking a selfie at Shimla in 2018. A study reveals 41 per cent of Indians are unable to go on holidays. (Deepak Sansta/Hindustan Times via Getty Images)

According to a survey, India tops the list of the most vacation-deprived people. 41 per cent of Indians, willing to go on a holiday, were not able to do so since they were not able to take time off in the last six months, reports the Financial Express.

The ‘Expedia Vacation Deprivation Report 2018’ is a survey of more than 11,000 employed adults in the 19 countries regarding their work-life balance. The survey was conducted between 19-28 September 2018.

The company released a statement which said, “Professional reasons and aspirations of longer vacations keep them away from availing their leaves,” while stating 30 per cent of Indians save up time for a long holiday and 24 per cent of Indians cannot even afford a holiday.

Marketing Head of the Brand Expedia in India, Manmeet Ahluwalia stated avoiding missing out on essential work decisions (25 per cent), fear of being seen less committed (19 per cent) and finding it difficult to coordinate time with their travel companion (33 per cent) as reasons of Indians for not availing holidays. Ironically, 78 per cent of bosses are supportive when it comes to taking a vacation.

It was found that vacations help employees to hit the reset button on stress and anxiety. Further, employees feel more relaxed, focused, motivated and become more productive after returning from holidays.