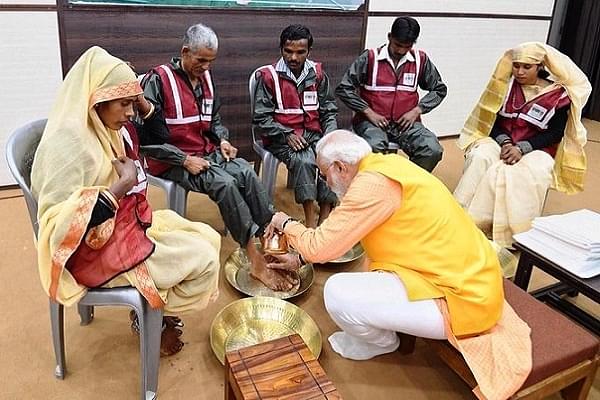 Prime Minister Narendra Modi today (6 March) donated Rs 21 lakh from his personal savings to the corpus fund for the welfare of sanitation workers of Kumbh Mela.

Earlier, the Prime Minister had received high praise for washing the feet of five Kumbh Mela sanitary workers and hailing them as Karma Yogis. This action was his way of expressing gratitude for their services and role in maintaining a very clean Kumbh Mela.

“They have been waking up early and sleeping late to ensure cleanliness of Mela area. They do not want any praise, but are doing their job without any fuss”, the Prime Minister had remarked in his address.

There have been various such charitable donations Prime Minister Modi has made in the past. Recently, he had auctioned mementos received during his tenure at the centre. All of the Rs 3.40 crore collected were donated to the Namami Gange program.

He had also donated the entire Prize Money of the Seoul Peace Prize of around Rs 1.30 crore for the program to rejuvenate Ganga.

Similarly he had auctioned the gifts he received till 2015, which fetched around Rs 8.33 crore. This amount too was donated to the Namami Gange program.

Upon completion of his tenure as Gujarat Chief Minister, Modi donated Rs 21 lakh from his personal savings for educating Gujarat government staffs’ daughters.

Modi had also raised Rs 89.96 crore by auctioning all gifts he received as chief minister and donated this to the Kanya Kelavani Fund. The money was spent on the education of girls.