PM Modi To Inaugurate Atal Tunnel At Rohtang On 3 October; Here's Everything To Know About World's Longest Highway Tunnel 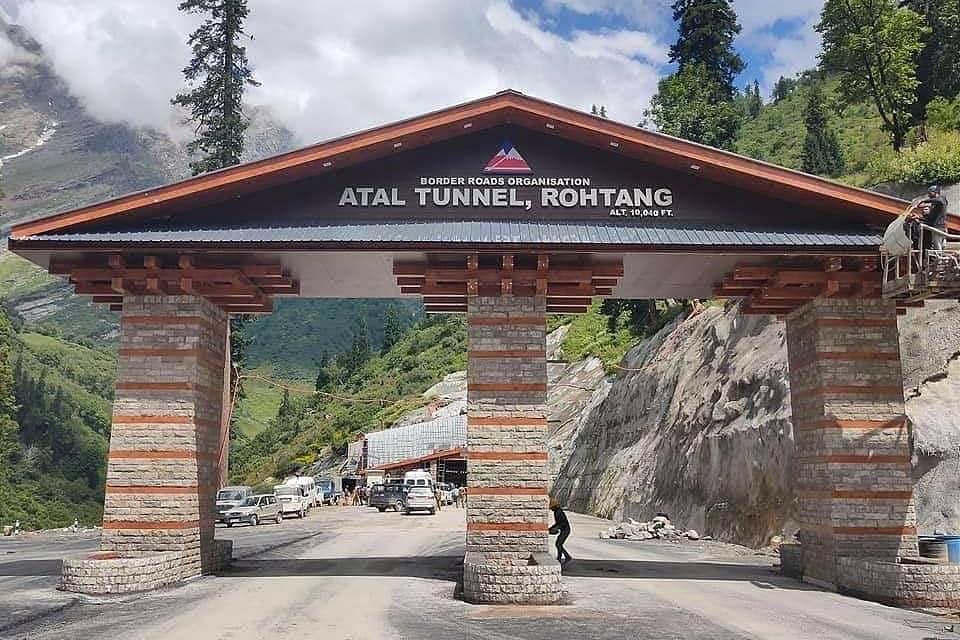 Atal Tunnel at Rohtang in Himachal Pradesh (Pic Via Twitter)

Prime Minister Narendra Modi will inaugurate Atal Tunnel at Rohtang in Himachal Pradesh on 3 October, the PMO said in a statement on Thursday (1 October).

After attending the inauguration function of the Atal Tunnel at South Portal, Manali, PM Modi will participate in public functions at Sissu in Lahaul Spiti and at Solang Valley.

The 9.02 km-long Atal Tunnel is the longest highway tunnel in the world and connects Manali to Lahaul-Spiti valley throughout the year. Earlier, the valley was cut off for about six months each year owing to heavy snowfall, the PMO said.

The Tunnel is built with ultra-modern specifications in the Pir Panjal range of Himalayas at an altitude of 3,000 m (10,000 feet) from the Mean Sea Level (MSL).

The tunnel reduces the road distance by 46 Km between Manali and Leh and the time by about 4 to 5 hours.

It is horse shoe shaped, single tube double lane tunnel with a roadway of 8 m and has an overhead clearance of 5.525 m.

The tunnel is 10.5-metre wide and has a 3.6 x 2.25 m fire proof emergency egress tunnel built into the main tunnel itself.

Atal Tunnel has been designed for traffic density of 3000 cars per day and 1500 trucks per day with max speed of 80 km/hr.

It has the state of the art electromechanical system including semi transverse ventilation system, SCADA controlled firefighting, illumination and monitoring system.

The hunnel has key safety features built into it, including entry barriers at both portals, telephone connections at every 150 m for emergency communication, fire hydrant mechanisms at every 60 m, auto incident detection system with CCTV cameras at every 250 m, air quality monitoring at every 1 km, evacuation lighting and exit signs at every 25 m, broadcasting system throughout the tunnel, fire rated dampers at every 50 m and cameras at every 60 m.

The decision to construct a strategic tunnel below the Rohtang Pass was taken on 3 June 2000 during the tenure of former prime minister Atal Bihari Vajpayee. The foundation stone for the access road to the South Portal of the tunnel was laid on 26 May 2002.

The Border Roads Organisation (BRO) worked relentlessly to overcome major geological, terrain and weather challenges that included the most difficult stretch of the 587-metre Seri Nalah Fault Zone. The breakthrough from both ends was achieved on 15 October 2017, the statement said.

In December 2019, PM Modi led Union Cabinet decided to name the Rohtang Tunnel as Atal Tunnel to honour the contribution made by the former PM Atal Bihari Vajpayee.