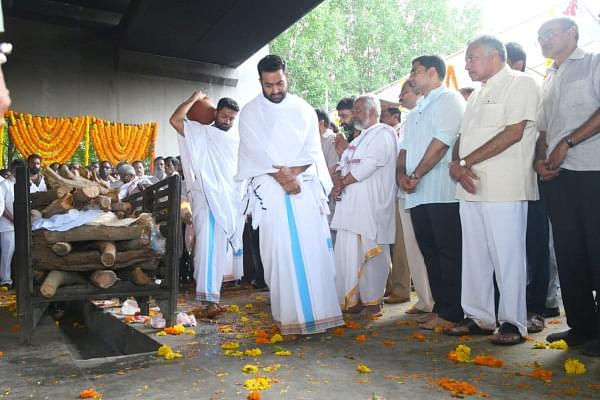 Poignant scenes were witnessed at the funeral of actor Nandamuri Harikrishna on Thursday (30 August) which was performed with full state honours, Deccan Herald has reported.

Harikrishna an actor and a Telugu Desam Party (TDP) leader died on Wednesday (29 August) in a road accident in Telangana’s Nalgonda district, while he was on route to a wedding. He was the son of former Andhra Pradesh Chief Minister NT Rama Rao.

Harikrishna was also a former Rajya Sabha MP, who had resigned from the upper house to protest Andhra Pradesh’s bifurcation. Andhra Pradesh Chief Minister N Chandrababu Naidu was his brother-in-law.

As reported by UNI, the funeral took place at Mahaprasthanam cremation grounds in Hyderabad’s Jubilee hills.

According to the NDTV, the pallbearers in his funeral included Naidu and former supreme court judge, Jasti Chelameswar.

The NDTV report claims that Chelameswar had close relations with the Nandamuri family and was also believed to be a close friend of Harikrishna.

Harikrishna’s eldest son Kalyanaram lighted his funeral pyre. This death marks another tragedy which befell the Nandamuri family. In 2014 Harikrishna’s son had also died in a road accident in Nalgonda district.

The Telangana government has sanctioned 450 square yards of land for the construction of Harikrishna’s memorial.