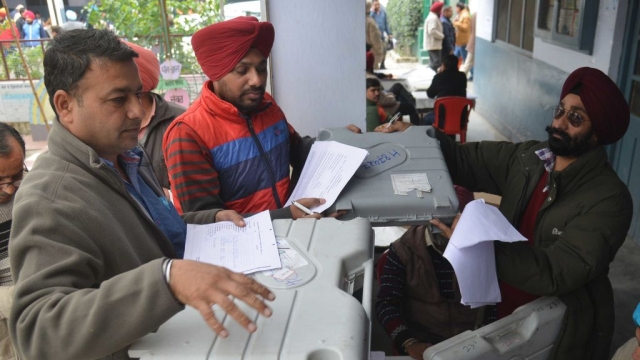 People in Punjab and Goa have begun casting their votes today (4 February) to elect their respective legislative assemblies. In Goa, the contest is over 40 seats, while Punjab votes over 117.

In the running today are the familiar race horses of Bharatiya Janata Party (BJP), the Congress , Shiromani Akali Dal (SAD) and the Aam Aadmi Party (AAP), along with a three-party alliance made up of Maharashtrawadi Gomantak Party, Goa Suraksha Manch and Shiv Sena in Goa.

In Punjab, two mega battles take place today in the form of Lambi and Jalalabad constituencies. In Lambi, Chief Minister Parkash Singh Badal is facing off against Captain Amarinder Singh of the Congress. Also, Deputy Chief Minister and son of Parkash Singh Badal, Sukhbir Singh Badal will be in battle with AAP’s Bhagwant Singh Mann today over Jalalabad; the latter is possibly the chief ministerial aspirant in the event that AAP wins in the state.

The Badals will be wary of the cloud of anti-incumbency hovering over their heads after having been in power in the state for 10 years. Congress’s captain has been vocal throughout the campaign about dethroning them from the top job. AAP, on the other hand, has been reportedly attracting the youth, who are vying for change in the state.

The Amritsar Lok Sabha seat is also up for voting today as it fell vacant after state Congress chief Captain Amarinder Singh resigned from it.

Meanwhile Prime Minister Narendra Modi today urged the people of both the states, especially the youth, to come out and vote in large numbers.

Urging people of Punjab & Goa to turnout in record numbers & vote in the Assembly elections. I particularly urge my young friends to vote.

The voting in Goa began at 7am and in Punjab at 8am. Nearly 2 crore voters in Punjab and 11.10 lakh voters in Goa are expected to make their voice heard through the ballot box, deciding the fate of 1,145 and 251 candidates in the states respectively.