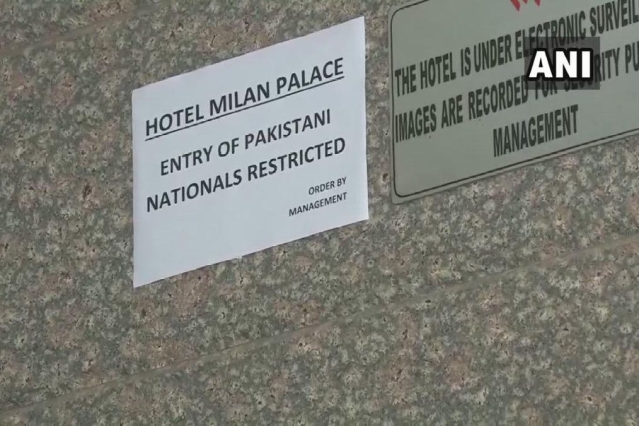 A hotel in Uttar Pradesh’s Prayagraj has restricted the entry of Pakistani nationals as a mark of protest against the dastardly terror attack in Pulwama of Jammu and Kashmir that killed more than 40 Central Reserve Police Force (CRPF) personnel.

The Hotel Milan Palace in Prayagraj has put up a notice at its entrance stating that entry of Pakistani nationals is restricted there.

According to an ANI tweet, notice stating 'Entry of Pakistani nationals restricted' was seen outside Hotel Milan Palace. When asked about the notice, Hotel manager said that they had put up the notice after the Pulwama suicide bombing attack as it was the only way they could register their protest against the dastardly terror act.

"We had put up the notice after Pulwama attack,” the manager was quoted in the ANI tweet as saying.

The manager said that no Pakistani National has come to the hotel but if they come they would not be allotted rooms there.

“We won't allot them (Pakistani nationals) rooms. We're protesting in a way we can,” the manager said.

Prayagraj: Notice stating 'Entry of Pakistani nationals restricted' seen outside Hotel Milan Palace. Manager says, "We had put up the notice after Pulwama attack. No Pakistani national has come here but even if they come we won't allot them rooms. We're protesting in a way we can pic.twitter.com/GS9WrKoqIp

Earlier on 14 February this year, over 40 CRPF soldiers lost their lives in the Pulwama district of Jammu and Kashmir when a terrorist of Pakistan-based terror outfit Jaish-e-Mohammed (JeM) rammed an explosive-laden vehicle into the CRPF convoy.