Proud Of Being The First Hindu-American To Run For President, Says Tulsi Gabbard; Slams Media For ‘Religious Bigotry’ 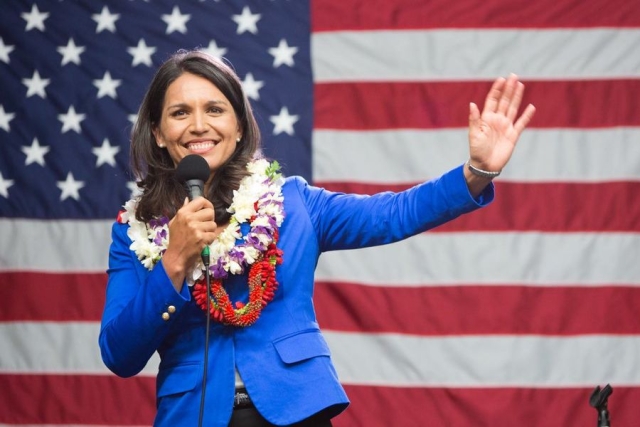 Democratic party Congresswoman and presidential aspirant Tulsi Gabbard has expressed pride in her Hindu identity while coming down heavily against the alleged campaign seeking to malign her and those supporting her for their Hindu faith, accusing such detractors of ‘religious bigotry’, reports The New Indian Express.

Gabbard, who is the first Hindu representative in the United States (US) Congress, came out with the allegations in an op-ed written for the Religious New Services, calling out the media campaign against her camp as “profiling and targeting of Hindu Americans and ascribing to them motives without any basis".

The 37-year-old Congresswoman had declared her presidential bid on 11 January, becoming one of the first few big names to announce their intention to run for the highest office.

Weâve seen how destructive religious bigotry is right here in America. Whether Hindu, Muslim, Buddhist, Christian, atheistâwhatever path people have chosenâevery one of us must stand up & condemn those who foment bigotry based on religion, race, or gender. https://t.co/SeZfDkZQvh

In her write up, Gabbard mentioned how she has been attacked with allegations of being a Hindu Nationalist.

"My meetings with Prime Minister Narendra Modi, India's democratically elected leader, have been highlighted as 'proof' of this and portrayed as somehow being out of the ordinary or somehow suspect, even though President (Barack) Obama, Secretary (Hillary) Clinton, President (Donald) Trump and many of my colleagues in Congress have met with and worked with him," Gabbard said.

She recalled how after being elected to the US House of representatives in 2012, she made the decision took her congressional oath by swearing on the Bhagavad Gita, describing it as the supreme Hindu scripture. She remarked how Krishna’s teachings in the book had supplied her with wisdom and spiritual solace.