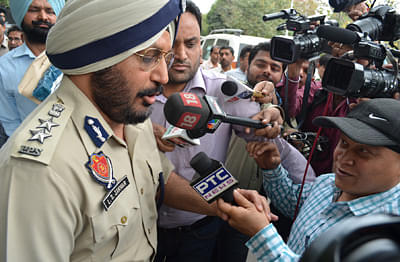 DIG (Jails) Lakhwinder Singh Jakhar, currently under suspension on graft charges, on Sunday, submitted his resignation claiming that he was doing so protest against the recently enacted farm laws and in solidarity with the protesting farmers, The Tribune reported.

In May this year, Punjab government suspended Lakhwinder Singh Jakhar on corruption charges. The action followed a preliminary inquiry by IG Jails into allegations by Deputy Superintendent Vijay Kumar, in charge of the Patti sub-jail. Kumar alleged that during a visit on April 7, Jakhar and his staff demanded a monthly bribe and while he paid Rs 10,000, one of the jail warders paid Rs 3,000 to the DIG’s driver. The inquiry recommended action against Jakhar and a charge-sheet was filed.

“I am a farmer first and a police officer later. Whatever position I have got today, it is because my father worked as a farmer in the fields and he made me study. Hence, I owe my everything to farming,” Jakhar was quoted as saying.

In his resignation letter, Jakhar offered ‘to deposit three months’ salary of notice period and other arrears as well, so that he can be relieved at the earliest.’

Jakhar said he would join the farmers' protest.