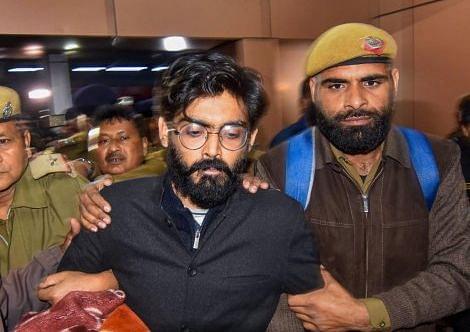 The Special Cell of Delhi police arrested Jawaharlal Nehru University (JNU) PhD scholar Sharjeel Imam in connection with the February Northeast Delhi riots. He has been booked on the charges of Unlawful Activities (Prevention) Act (UAPA).

On Sunday (24 August), he was brought back to Delhi from Assam on the production warrant.

On 21 July, the Delhi police was scheduled to bring him to the national capital but just ahead of his departure for Delhi, Imam tested positive for COVID-19.

Delhi Police on 25 July had filed a chargesheet against Imam in connection with a case related to his alleged inflammatory speeches during the protests against the Citizenship Amendment Act (CAA) at several places. The 600-page charge sheet was filed, under section 124A (Sedition), 153(A) (Promoting enmity), 153 (Assertion prejudicial to national integration) (promoting enmity, Hatred between different communities, 505 (spreading rumours) IPC and Section 13 of Unlawful Activities (Prevention) Act, 1967, in Delhi’s Patiala House court.

In his provoking speeches, Imam had talked about cutting of Assam and rest of the north-eastern part from India.

In a video that went viral in January, Imam was heard saying, “If we can organise 5 lakh people, it would be possible to permanently cut off Assam with rest of India...if not permanently, then at least for a few months... only then will the government hear our voice”.