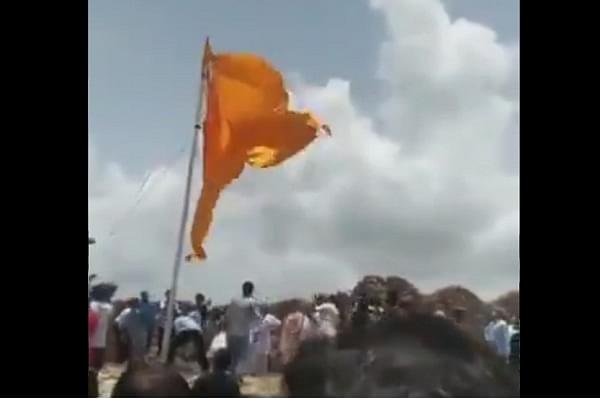 In a shocking incident, Ramkesh Meena, independent Member of Legislative Assembly (MLA) from Rajasthan, tore a saffron flag that had the inscription of ‘Jai Shri Ram’ over it.

This event took place at the Aamagarh Fort in Jaipur where Meena led a mob that brought down a flag that was hoisted over there and soon after that they tore it apart. After the incident, multiple Hindu organizations have firmly objected to Meena’s misdeeds.

The video of the tearing of the saffron flag has gone viral on social media inviting criticism from various users.

Anti-Hindu sentiments are running high in Congress-ruled Rajasthan under the leadership of Chief Minister Ashok Gehlot. As per an India TV report, independent MLA Ramkesh Meena tore a saffron flag with âJai Shri Ramâ inscribed on it. The incident is of Aamagarh Fort in ,,,. pic.twitter.com/D2eDnJD7zn

It should be noted that this is the same site where certain culprits had desecrated several Shiv Lings a few days ago.

Though Meena is an independent MLA from Gangapur City, he apparently swears his allegiance to the ruling Congress party in the state.

Earlier, the legislator faced opposition by members of his own community along with the Congress workers for having passed inappropriate remarks on former Deputy Chief Minister Sachin Pilot.