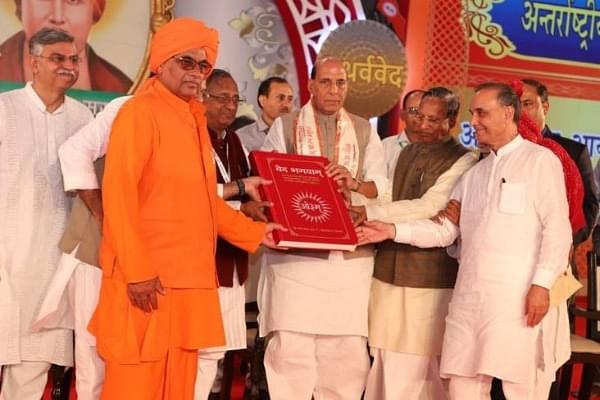 Home Minister Rajnath Singh on Sunday (28 October) praised Swami Dayananda Saraswati and Arya Samaj for working in the area girlsโ education and clean environment in India, Indian Express has reported. Attending a four-day global convention of the Arya Samaj, he said that Indiaโs strength lies in its cultural unity.

โIndia wanted to be powerful not just for the benefit of the country but for the entire world and humankind. India is a country which gave the concept of โVasudhaiv Kutumbakamโ โ the world is one family โ to the world. Sages of India in the ancient spread the message of humanity and culture not only within the country but also around the world,โ Rajnath Singh told the gathering.

He added that the Samaj was not merely an organisation only, but also a revolutionary thought which awakens everyone and motivates โthose who are sleepingโ. He said that spirituality can be attained only by those who have an open mind.

Arya Samaj runs more than 6,000 schools. The convention of Arya Samaj was attended by representatives of 32 different countries, and other eminent personalities from different walks of life. The Home Minister added that he would discuss the idea of having year-long celebrations in 2024 to commemorate the 200th birth anniversary of Swami Dayanand Saraswati with the Prime Minister.