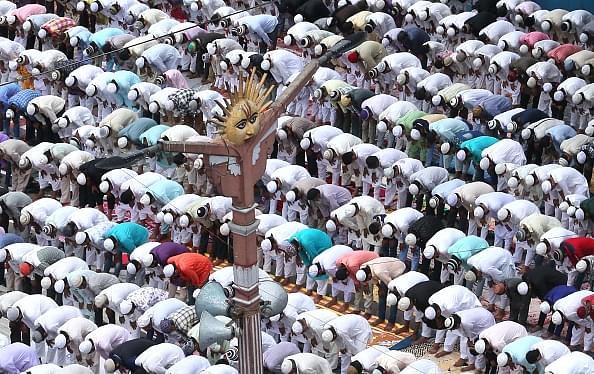 A study conducted by the Border Security Force (BSF) in the border district of Jaisalmer, Rajasthan, has revealed a worrying trend of radicalisation among the Muslim community. The BSF report also expresses concern about the rapidly shifting demographic balance of the district, with Muslims in sample villages growing at 22-25 per cent compared to an 8-10 per cent growth rate for Non-Muslims, reports Times of India.

Local Muslims are abandoning traditional Rajasthani dressing and grooming styles in favour of imported Arab culture. The religiosity of the Muslim community has also increased with even children attending mosques at higher rates for more frequent namaaz prayers.

The ‘study of demographic pattern in the border areas of Rajasthan and its security implications’, has revealed that areas like Pokhran and Mohangarh of Jaisalmer have seen an increasing number of radical clerics from Deoband, Uttar Pradesh, who have preached fanaticism and orthodoxy to the local Muslims, seeking to create a paramount feeling for religion.

Meanwhile, Hindus of these areas have begun to shift closer to right-wing Hindu organisations. The increasing number of local participants in these organisations has resulted in their greater role in religious activities through monetary, training and educational involvement.

Although the study did not find any concrete evidence of pro-Pakistan sentiments among the Muslim community, or any signs of confrontation with the Hindus, the study noted the presence of a politically influential leader who frequently visits Pakistan due to close business ties there.

"(The) involvement of the Muslim population in anti-establishment activities and surfacing of anti-India sentiments on his call can't be ruled out...", the report warned.