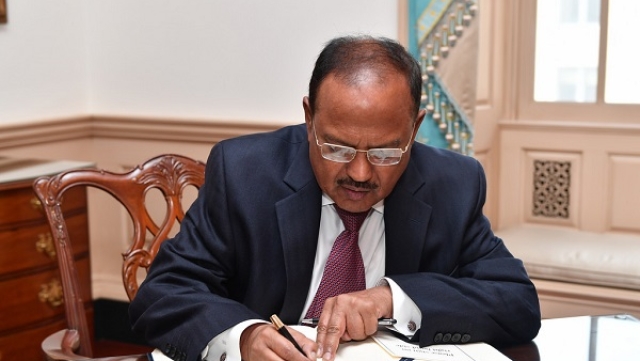 National Security Advisor Ajit Doval, at his residence on Sunday (10 November), held a meeting of eminent religious leaders from across faiths and scholars to discuss maintaining peace and harmony in the wake of Ayodhya verdict.

After the meeting, a joint statement was issued, which said, "all the participants reposed full faith in the rule of law and Constitution of India. The leaders resolved to honour the decision of the Supreme court and appealed to all countrymen to abide by it, emphasising that the national interest overrides all other considerations.

They extended their full cooperation to the Government in ensuring peace, communal harmony and upholding the rule of law."

"I demanded revival of National Integration Council and said that the meeting of NIC should be held at least twice a year to know about each other and help confidence building measures within faith." Naved Hamid, Chairman, Majlis-e-Mushawarat told IANS.

He added that his demand was supported by most of the participants.

The attendees also acknowledged that the situation after the Ayodhya verdict may be exploited by "anti-national" forces both within the country and outside, with a subtle reference to Pakistan without naming it.

Swami Ramdev, who also attended the meet, said that the two communities should move forward and build confidence amongst the fellow countrymen, while Sunni Waqf Board Chairman Zafar farooqui said that they are not going to file review petition against the order.