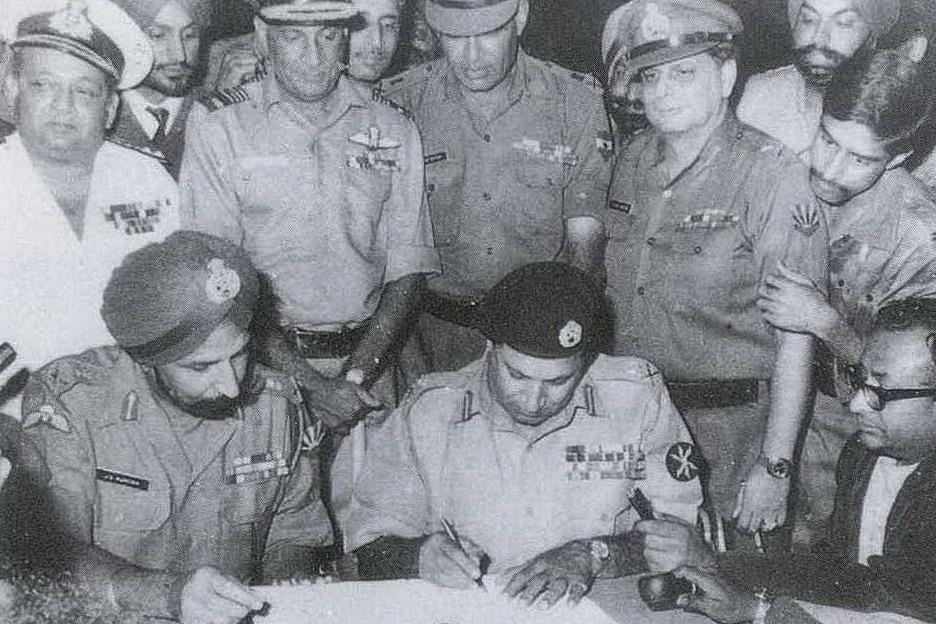 Lt Gen Niazi signing the Instrument of Surrender under the gaze of Lt Gen Arora. (Pic Via Indian Navy)

Bangladesh Minister of Liberation War Affairs, AKM Mozammel Haque, handed over the ‘Sammanana’ plaques to the families of martyred soldiers at the Indian Army’s Eastern Command Headquarters at Fort William in Kolkata.

Twelve Indian soldiers were posthumously honoured including seven from Indian Army, two from Air Force, two from Border Security Force (BSF) and one from Navy.

The Bangladeshi delegation comprised of 30 ‘Muktijoddhas’, who took part in the liberation war, and six serving officers of Bangladesh’s Armed forces.

Haque, describing 16 December as the most glorious day in every Bengali’s life, said after suffering a nine-month long genocide by the Pakistani forces, the fruits of the freedom were achieved.

“The Indian soldiers fought for our cause and laid down their lives,” he said.

General Officer Commanding in Chief (GOC-in-C), Lieutenant General MM Navarane, termed the honouring of the families of martyred personnel as a great initiative by the Bangladesh government and said the process will continue in the coming years, strengthening bond between the two countries.

According to the report, Bangladesh government has decided to honour over 1,600 Indian Armed Forces personnel who were martyred during the Bangladeshi Liberation War of 1971.