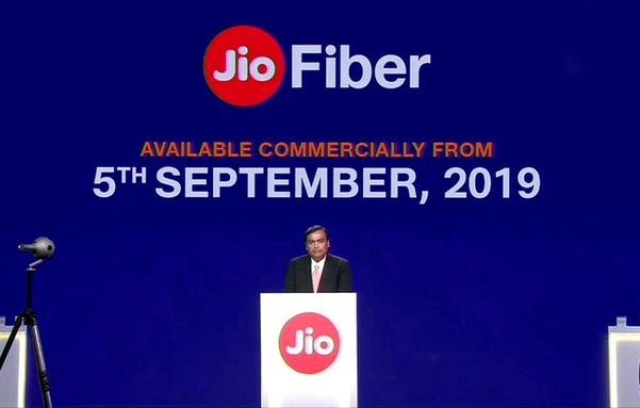 Mukesh Ambani's Reliance Jio is offering two months of free service of the upcoming broadband service- the Reliance Jio Fiber for its preview customers once the service rolls out on 5 September, The Times of India reports.

Further, since there is no restrictions on the security deposit, users will be able to claim the refund of Rs 2,500 paid at any time. Sources said that new users subscribing after its commercial rollout on 5 September, will need to pay a security deposit of Rs 1,500 and installation charge of Rs 1,000.

The first-to-the-home (FTTH) technology-based broadband service was announced last year under the name Reliance Jio GigaFiber. After a year under trials, Mukesh Ambani announced the launch for 5 September during the 42 Reliance Industries Limited (RIL) Annual General Meeting on 12 August.

To pull new customers, Ambani announced the Jio Fiber Welcome Offer. Reliance Jio will offer an HD LED TV or a 4K TV along with a 4K set-top box (STB) for opting the annual rental plan, Jio Forever Plan, details of which are yet to be released.

Apart from the broadband services, Jio Fiber users will be able to avail various other benefits like the Jio Home Phone, Jio Postpaid plus, Jio STB with gaming support and the First-Day-First-Show (premium subscribers).