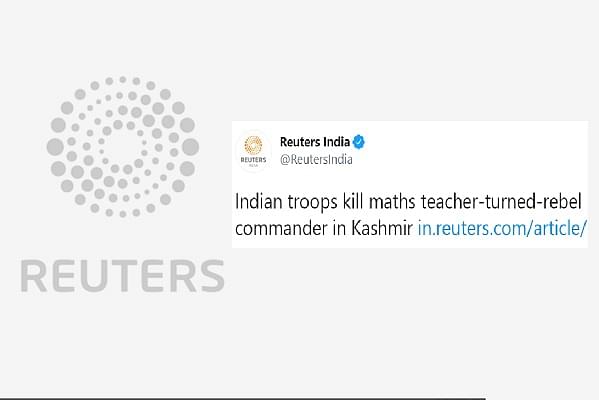 It should be noted that Naikoo, who carried a reward of Rs 12 lakh on his head, was the longest surviving terrorist commander in Kashmir and had killed various armed forces personnel and civilians. He had also mastermind the killings of local policemen to put pressure on them not to engage in anti-terror operations.

He was eliminated after massive manhunt was launched by a joint team of J&K Police, Indian Army and CRPF in Pulwama on the night of 6 May after receiving a specific intelligence input.

One user wrote, “ Hizbul Mujahideen is not a group of "rebels." It is an Islamist terrorist organisation. It has been formally designated a terrorist organization by the US government. As well as the EU and India.”

Another one remarked, “This is the exact reason why people in India question the credibility & biasness of the 'western' media.”

One police officer commented, “As someone who has privilege of working with brave sons of #BharatMata who laid down their lives so that fellow #Indians remain safe & live a happy life, it pains me a lot to see how a section of media has conducted itself while reporting neutralization of terrorist #RiyazNaikoo.”

Another user expressing his anger remarked, “A very well thought ploy from Left loonies to call #Islamist_Jihadi_Terrorist rebels and Kashmir disputed, they want to give it legitimacy. @Reuters you people are hate filled fake news paddles.”

Similar responses were given by other users as well.