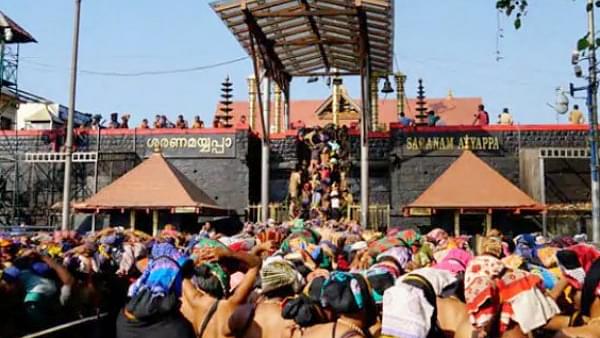 Since the first two weeks of the Mandalam-Makaravilakku season, footfalls at the Sabarimala temple have declined compared to the previous season. This has also resulted in a drop in revenue, even as those who made the pilgrimage donated less and reportedly bought less Aravana Payasam (Prasada at the temple).

This kind of unprecedented, yet innovative commercial protest by devotees is reportedly against the shoddy administration in the temple by the Travancore Devaswom Board and for its attempts to destroy the temple's traditions.

The temple management, when it recently opened the donation boxes, was shocked, when it found slips of paper with “Save Sabarimala” written on them instead of money. Moreover, visitors are down to 60 per cent and revenue by 70 per cent, according to TDB.

“ If the situation continues, the salaries of Devaswom employees will be affected,” Hindustan Times (HT) quoted TDB president A Padmakumar as saying.

Amidst the staunch protests and campaign against the administrator and the communist government’s policies at Sabarimala, the temple management is reportedly launching an advertising campaign saying the shrine is “safe” to visit.

The TDB has reportedly approached a few advertisement agencies to run the advertisement campaign in the neighbouring states of Karnataka, Tamil Nadu and Andhra Pradesh from where most of the pilgrims come.

HT reports that, ‘Aravana Payasam (a black kheer made of rice, jaggery, ghee and cardamom) accounts for 60 per cent of the revenue (the 2016-17 season revenue was Rs 300 crore) of the temple.

The temple usually produces 48,000 cans a day along with sufficient buffer stock. With the number of pilgrims falling, and diminishing demand, the temple has cut down its production to 10,000 cans a day.