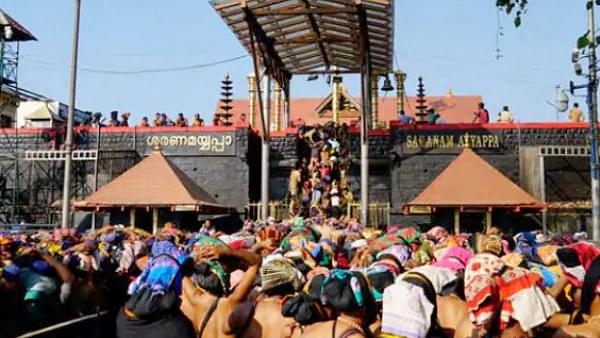 The Supreme Court has reserved the judgement in a batch of review petitions filed against the 28 September verdict that removed the centuries-old tradition of restriction of women belonging to the age group of 10 and 51 from entering Sabarimala, reports Live Law.

Senior Advocates K Parasaran, V Giri, Dr A M Singhvi, Shekhar Naphade and R Venkatramani, submitted arguments for the petitioners, which included Nair Service Society (NSS), tantri of the temple and former Chairman of Travancore Devaswom Board during the morning session. They contended that the restriction was based on the nature of the deity and had nothing to do with gender bias.

They had also said that matters of constitutional morality is subjective and should not be applied to the issues of faith.

“The right to worship has to be exercised in consonance with the nature of deity and essential customs of the temple. They held that the 28 September judgment erroneously imported the concept of “untouchability” under Article 17 to the situation of Sabarimala temple, without understanding its historical context.

The exclusion in Sabarimala is limited to a particular age group and not an entire class of people, argued Advocate Prasaran.

The matter of exclusion is an internal matter of religion. Unless there is a criminal law which forbids a practice, Courts cannot interfere, said Naphade.

“Either you believe in a ritual or opt not to become part of it. You cannot seek to become a part of the ritual by questioning its basis,” Venkatramani argued.

However, the government of Kerala opposed the petitions challenging the verdict. The counsel appearing for Kerala government, advocate Jaideep Gupta said that an essential practice of an individual temple could not be regarded as a critical practice of the religion.

The Temple administrator, Travancore Devaswom Board through Advocate Rakesh Dwivedi also opposed the review petitions. However, Justice Indu Malhotra questioned the change in the stance of the board. The board replied that it decided to respect the judgement as opposed to its earlier stance of respecting the centuries-old tradition.