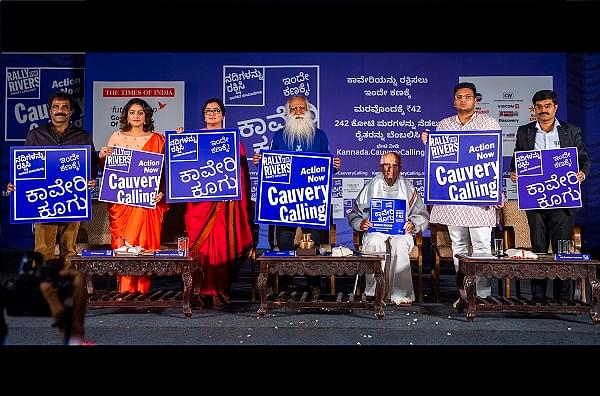 Dignitaries holding ‘Cauvery Calling’ signs prior to the rally.

A motorcycle rally led by spiritual leader Sadhguru was flagged off yesterday (6 September) by the head of the erstwhile ruling royal family of the Kindgom of Mysore, Yaduveer Krishnadatta Chamaraja Wadiyar, in Mysuru.

Some 300 or so riders showed up to the rally, which was part of the ‘Cauvery Calling’ campaign launched by Sadhguru to revitalise the Kavery river and raise awareness about the protecting the country’s rivers. The rally initially began by crossing the Gun House, and then passing by Ramaswamy Circle, and formally ended at Dodda Gadiyara.

Prior the commencement of the rally, the Maharaja of Mysore Yaduveer Wadiyar narrated how in the past all dynasties of the Mysore Kingdom had been dependent on the Kaveri river.

Sadhguru prefaced this by cautioning the audience about the worsening situation faced by the river today. “Cauvery is one of Karnataka’s treasures, but today she is in distress,” he said.

A number of political leaders, officials and some public personalities showed up to participate. The rally is now headed to Bengaluru, where it will start tomorrow (8 September).