‘Say NO To Hartal’: Hundreds Hit Kochi Roads In Vehicle Rally As Part Of Anti-Strike Campaign 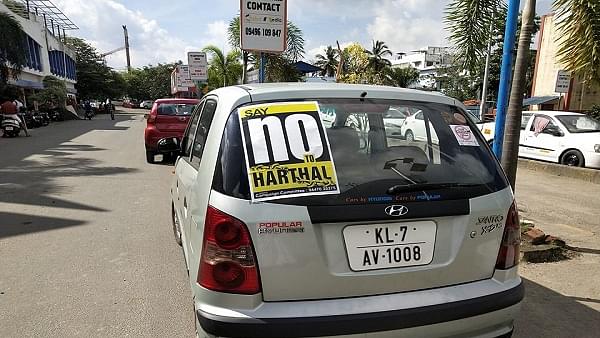 A car with a sticker supporting the anti-Hartal campaign. (Photo by Say NO to Hartal via Facebook)

In a public display of disgruntlement with the state’s ‘Hartal’ culture, several hundred vehicles took part in a rally on Kochi’s main roads as part of a mass campaign against the politically motivated forced shutdowns that plague Kerala, reports The New Indian Express.

The rally began from Jawaharlal Nehru Stadium and covered the whole city. Individuals dependent on Tourism, a local bikers’ club called ‘Lady Bullet Bike Riders’ and traders’ representatives were some of the sections who partook in the event.

Some private buses and autorickshaws kept their headlights on to express solidarity with the campaign. Lok Sabha MP Shashi Tharoor, MLAs V D Satheeshan and Hibi Eden, and businessman Kochouseph Chittilappilly were some of the notable individuals who declared their support for the movement.

The entity behind the vehicle rally was a group called ‘Say NO to Hartal’, which has been actively campaigning against such shutdowns since 2010. Kerala has already seen 97 hartals in 2018 so far.

Say NO to Hartal’s general convener Raju P Nair stated that the massive public response to their campaign was clear proof that people were extremely fed up with arbitrary shutdowns forced on everyone by political parties.