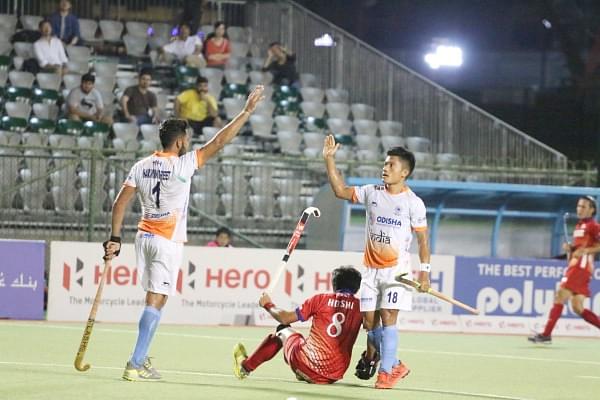 India during match against Japan (@asia_hockey/Twitter)

India continued their dominance in the Asian Champions Trophy as they comfortably beat Japan 9-0 for their third consecutive win in the round-robin stage of the tournament being held in Muscat, Oman.

Rallying back to beat Pakistan 3-1 on Saturday (20 October) after being a goal down had helped the team gain momentum and confidence for the tough fixture against Japan.

A brace each from Lalit Upadhyay, Harmanpreet Singh and Mandeep Singh added India’s tally as they breezed past a very good opponent.

Akshadeep had a brilliant game as he pulled strings and orchestrated the attack while getting himself a goal.

India had to settle for bronze in the Asian games while Japan claimed gold despite losing to India 8-0 during the group stage. Japan did not take their opportunities as they struggled to convert the work put into building a play by finishing the chances created which were very few as India dominated possession.

India’s next challenge will be facing a Malaysian team on Tuesday (23 October) who defeated hosts Oman 3-1.