Shahrukh Who Wielded Gun At Cop In Delhi Riots Found To Be Part Of Deep-Rooted Conspiracy: Delhi Police Chargesheet 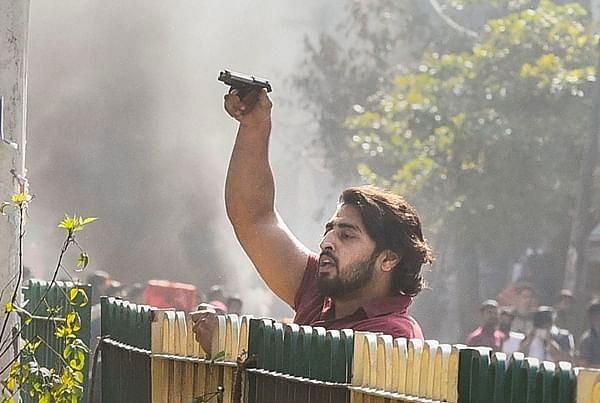 Shahrukh Pathan, who was seen aiming a gun at a policeman during the riots in Delhi in February, along with four others has been found to be a part of a deep-rooted conspiracy which triggered the communal riot at Maujpur Chowk. The investigating agency will be submitting chargesheets before the courts on Tuesday (9 June), including the one which pertains to the alleged role of Pathan and others in the riots.

In the Maujpur Chowk riot case, the police found that on February 24 at about 11 a.m., two groups clashed at the chowk.

One group was supporting the Citizenship Amendment Act and the National Register of Citizens and the other group was opposing it. Initially the protest was peaceful but soon it became violent and led to incidents of stone pelting, brick-batting, arson, firing and sabotage from both sides.

This led to injuries to several policemen as well as other people and created an atmosphere of fear among the public. On that day, one person Vinod Singh lost his life in a related incident and a separate case of murder was registered against his killers.

Five accused, including Shahrukh Pathan, were arrested in this case. "During probe it was found that Pathan is the main accused in another case in which he had brandished his gun and shot at Head Constable Deepak Dahiya in full public view," the police said.

His illegal firearm, a 7.65 mm pistol along with two live rounds, was recovered from him. Several shots had been fired by him and three empty shells were recovered from the spot, the police said.

The Kardampuri Pulia riot case is about the murder of Mohammad Furkan, gunshot injuries to four other people and injuries to 17 policemen because of the heavy stone pelting on 24 February.

During the probe, the police found that the closed-circuit television in the area was damaged by the rioters on 23 February. They, however, managed to get some video footage. Based upon the statements of the eyewitnesses, video evidence and other technical evidence, four people were arrested. "Today chargesheet is being filed against all the four accused persons and further investigation is being carried out to identify and arrest more accused," the police said.

The Kardampuri government dispensary case pertains to the communal riots on 25 February behind Ambedkar College on the service road where the rioters set fire to two parking lots and stabbed 32-year-old Deepak. The deceased Deepak was a e- rickshaw driver.

Based upon statements, video evidence and other technical evidence, so far four accused persons have been arrested in this case.

"Today chargesheet is being filed against all the accused persons. Further investigation is continuing to identify and arrest more accused," the Delhi Police said.