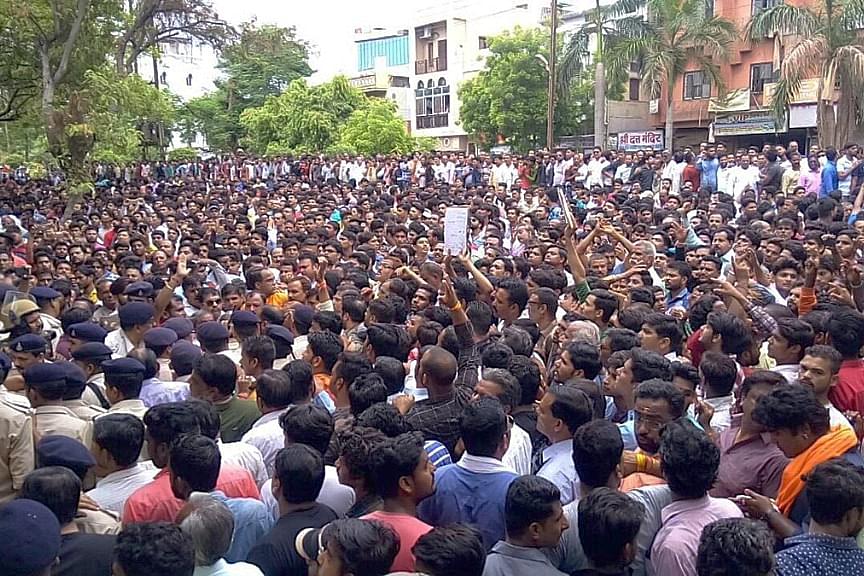 Unprecedented public outcry in Madhya Pradesh after the matter came to light. (pic via Twitter)

Members of the Muslim community have come together to вҖҳdisownвҖҷ one of their kind who is accused of raping a seven-year-old girl in Mandsaur. Mandsaur has been in the news recently for troubles faced by farmers. The Muslim community has now demanded вҖҳdeath penaltyвҖҷ for the rapist, in a bid to repair a seemingly damaged reputation as reported by The Times of India.

In an apparent show of solidarity with the victim, the members of the community refused to allow the body of the accused to be buried in the village, in case he is awarded the death penalty. Terming the accused a вҖҳmonsterвҖҷ and a вҖҳblotвҖҷ on their community, Waqf Anjuman Islam Committee spokesperson Sadar Mohammed Yunus Sheikh told reporters after leading a delegation to submit a memorandum to Mandsaur SP Manoj Singh, that the accused be hanged.

Police have arrested a porter, Irfan Mev alias Bhaiyyu, for the horrifying crime.

Chief Minister of Madhya Pradesh, Shivraj Singh Chauhan, has ordered a thorough investigation into the incident and has directed officials to ensure a speedy trial.

The victim is battling for life in a hospital in Indore after having been operated upon for over two hours. The seven-year old was reportedly violated with a steel road and the accused also tried to slit her throat after the crime.

Police said Irfan lured the girl with chocolates and then raped her. His father is reportedly an accused in communal violence that had broken out in Ringnod town in MP earlier. The family had then migrated to Mandsaur.

The district has witnessed an unprecedented public outcry in the aftermath of the rape. Shops in every town and village were shut. People thronged the streets demanding that the accused be hanged in full public view.