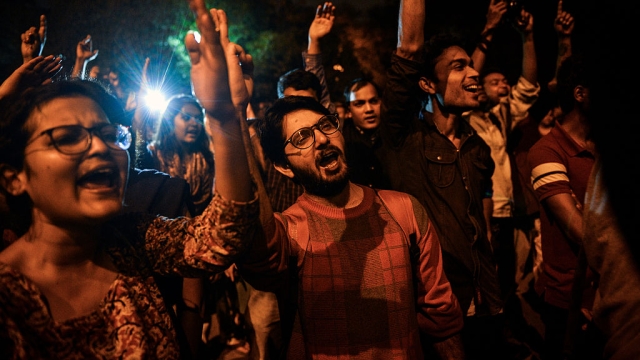 The Jawaharlal Nehru University (JNU) administration today said it would take "severe action" against a group of students who disallowed an ambulance carrying Dean of Students (DoS) Prof. Umesh Kadam to hospital after he fell ill during a meeting.

A notice issued by the JNU Registrar Pramod Kumar alleged that some students disrupted the meeting of the Inter Hostel Administration (IHA) held at 10 a.m. at the Convention Centre of the University. They did not allow DoS Umesh Kadam to be taken to hospital after he fell sick and his blood pressure shot up. The university doctors were also not allowed to check on Kadam by this "unruly crowd of students".

The notice said that Kadam's condition was getting worse and even his wife and two children pleaded with the students.

After a lot of effort, the DoS was shifted to the ambulance, but the students again surrounded the vehicle and did not let it move towards the hospital.

Kadam was then confined in a doctor's office and the students surrounded the Health Centre.

"This kind of behaviour by the students is highly condemnable and outrageous. The university administration is contemplating severe action against the students whose conduct today has been not only unbecoming, but dangerous and shameful," the notice said.

It said that the university will not be allowed to be held hostage to the whims of a small section of these agitating students and will brook no indiscipline inside the campus.

Outlining the whole scenario, the notice said the students, who are not members of the IHA committee, disrupted the meeting by forcibly entering the venue.

"The committee members requested the agitating students to go out and let the meeting continue.But, the students became more aggressive and began sloganeering loudly and approached menacingly towards the Dean of Students Professor Umesh Kadam."

"But, what was most shocking was the complete heartlessness and insensitivity displayed by the students. They did not allow the ambulance to move towards the hospital for an emergency rescue of Professor Kadam," the notice said.

Condemning the incident, JNU Vice Chancellor M Jagadesh Kumar posted on Twitter, "The university administration is contemplating on a severe action against some JNU students whose conduct today has been not only unbecoming, but dangerous and shameful. This kind of behaviour by a section of JNU students is highly condemnable and outrageous."

The University administration is contemplating on a severe action against some JNU students whose conduct today has been not only unbecoming, but dangerous and shameful. This kind of behaviour by a section of JNU students is highly condemnable and outrageous. pic.twitter.com/sHNpecjktR

Today the Inter Hostel Administration (IHA) meeting was scheduled to be held at 10 am in the convention centre of JNU. However, some students who are not members of IHA committee disrupted the meeting by forcibly entering the venue. pic.twitter.com/sCeY5w547U

After a lot of effort, when the DoS was shifted into the ambulance, the students again surrounded the ambulance and did not let the vehicle move towards the hospital, he alleged.

"Kadam's wife was pleading with students and asking the university security to shift him to a fully equipped hospital outside the campus, but these unruly students did not move," JNU registrar said.

Students blocking the Ambulance in which Dean of Students Prof. Umesh Kadam was being taken to the Health Centre in JNU. pic.twitter.com/4zz9apNEQ5