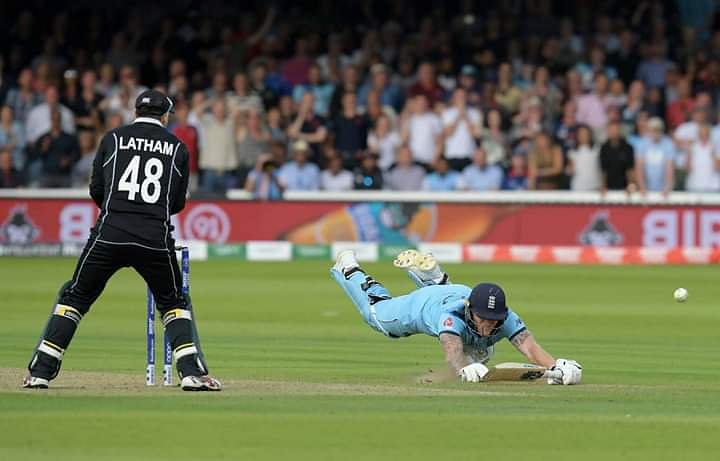 Australian umpire Simon Taufel has come out to say that the umpires made a judgement error when they England were awarded six runs during the last over of the ICC Cricket World Cup finals at Lord’s on Sunday (14 July), ESPN Cricinfo reports.

During the last over, Ben Stokes was awarded six runs after an overthrow hit his bat and raced to the boundary. However according to the Marylebone Cricket Club (MCC) laws sub-committee, which forms rules governing the gentlemen’s game, England should have been awarded five runs and not six, Taufel told Fox Sports Australia.

Taufel is not wrong. The importance of the one run comes into play since it was the final over of the match, which finished in a draw, and headed into a super over.

The 19.8 rule (Overthrow or wilful act of fielder) of MCC says:

“If the boundary results from an overthrow or from the willful act of a fielder, the runs scored shall be any runs for penalties awarded to either side and the allowance for the boundary and the runs completed by the batsmen, together with the run in progress if they had already crossed at the instant of the throw or act.

Law 18.12.2 (Batsman returning to wicket he/she has left) shall apply as from the instant of the throw or act.

A review of the ball reveals that at the moment the ball was released by Martin Guptill, batsman Stokes and his partner Adil Rashid had not crossed for the second run. It means England were supposed to be awarded five runs, and not six. More importantly, it would put new Adil Rashid on strike with three runs required from one ball.

Taufel, however, also defended the officials, saying that many things were happening at the same time. “In the heat of what was going on, they thought there was a good chance the batsmen had crossed at the instant of the throw,” the five-time ICC Umpire of the year said.

“Obviously TV replays showed otherwise. The difficulty you (umpires) have here is you've got to watch batsmen completing runs, then change focus and watch for the ball being picked up, and watch for the release (of the throw),” the former umpire said while adding the need to watch where the batsmen where at the exact movement, which in real-time is hard.

While acknowledging that the decision affected the game, Taufel said that the error did not cost the Black Caps the Championship. “It's unfair on England, New Zealand and the umpires involved to say it decided the outcome,” Taufel said.

This is not the first time in this edition of the world cup, that the umpiring, has been questioned. Australia vs West Indies game saw poor umpiring when opener Chris Gayle was given out twice before being overturned by the DRS. The controversy extended when Gayle was given LBW to Starc, but the previous ball a ‘no-ball’ and was missed by umpires.

The world cricketing agency has also received flack over the organising decisions and rules of the game. The finals of the world cup were decided on the context of hitting more boundaries in the match after the match was tied twice after 50 overs as well as super over.