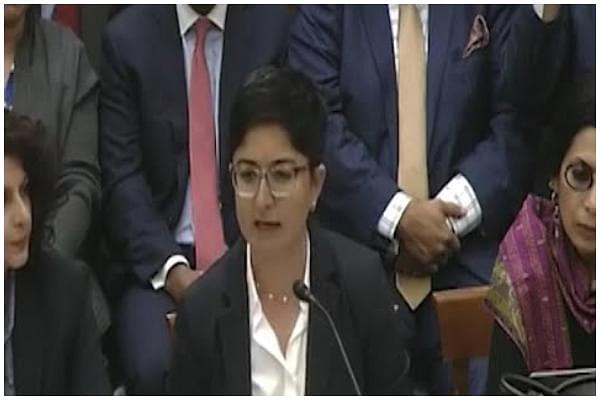 Fatima Gul, a Sindhi-American human rights activist, raised the issue of anti-Hindu violence in front of a US Congressional panel in Washington. The anti-Hindu violence broke out last month in Ghotki, Sindh province of Pakistan over a false blasphemy charge on a Hindu school principal.

Gul was testifying before the US Congressional Committee on Foreign Affairs, Subcommittee Asia, the Pacific and Non-Proliferation, during the hearing on "Human Rights in South Asia: Views from the State Department and the Region".

"The vast majority of Pakistani citizens experience oppression, violence, and religious and political persecution by government authorities and their supporters daily,” she said.

She urged the US Congress and the Trump administration to put pressure on Pakistan to immediately release and save the life of Ghotki School Principal Notan Lal.

Recounting the Ghotki incident, she said on 15 September, 2019, religious extremist groups and gangs of local thugs attacked temples, houses and businesses of the Sindhi Hindu Community in Ghotki.

"The attackers left chaos and terror across the neighbourhoods of Sindhi Hindus, with many fleeing. These attacks on the Sindhi Hindu community were carried out on the pretext that a professor, Notan Lal, had committed blasphemy. Lal and his wife had run a private school in Ghotki for almost two decades,” she said.

"One day, when Lal reprimanded a student for bad behavior, the angry student went to the police station and told officers that the Professor had insulted Mohammad, the Prophet of Islam. Despite the lack of evidence, Lal was taken into police custody. He has not been heard since then," Gul added.

Since 1990, at least 75 people have been killed for blasphemy in Pakistan, while 40 people are serving life sentences or are on death row for blasphemy not to mention people accused of blasphemy charges are killed extra judicially.

Citing the latest Human Rights Watch report, she said that around 1,000 young Hindu girls and 700 young Christian girls were forcibly converted to Islam and married to Muslim men. Despite the Child Marriage Prevention Act in Sindh, "the forced conversion and marriage of young Sindhi Hindu and Christian girls goes overwhelmingly unchecked. Police and the courts remain passive in most of the cases."