‘Some Parties Are Speaking Same Language As Pakistan’: PM Modi Takes On Opponents Of Citizenship Bill 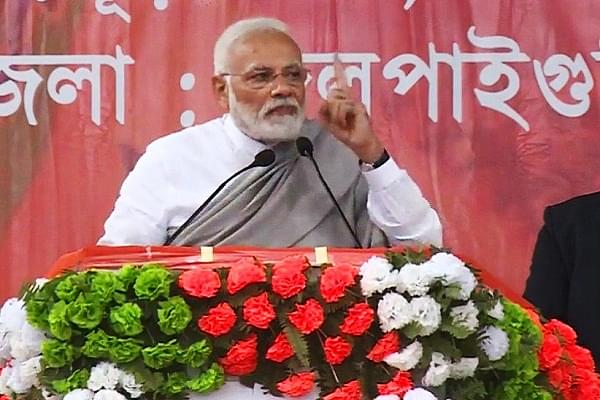 As the central government is set to table the Citizenship (Amendment) Bill, 2019 in the Rajya Sabha on Wednesday (11 December), Prime Minister (PM) Narendra Modi took on “some political parties” opposing the Bill and said they were speaking “same language as Pakistan”.

Sources: PM Modi in BJP Parliamentary party meeting said that some Opposition parties are speaking the same language as Pakistan on the #CitizenshipAmendmentBill pic.twitter.com/EqIcbZv0wH

He also said, "Citizenship Bill will be written in golden letters, it will give permanent relief to people who fled religious persecution."

Earlier on Tuesday, PM Modi expressed delight over the passage of the contentious Citizenship (Amendment) Bill 2019 in the Lok Sabha and lauded Home Minister Amit Shah's efforts in the same.

Taking to Twitter, PM Modi said, " Delighted that Lok Sabha has passed Citizenship (Amendment) Bill, 2019 after a rich & extensive debate. I thank the various MPs and parties that supported the Bill. This Bill is in line with India's centuries-old ethos of assimilation and belief in humanitarian values."

"I would like to especially applaud Home Minister Amit Shah Ji for lucidly explaining all aspects of the Citizenship (Amendment) Bill, 2019. He also gave elaborate answers to the various points raised by respective MPs during the discussion in the Lok Sabha," he said in another tweet.

I would like to specially applaud Home Minister @AmitShah Ji for lucidly explaining all aspects of the Citizenship (Amendment) Bill, 2019. He also gave elaborate answers to the various points raised by respective MPs during the discussion in the Lok Sabha.

The Citizenship (Amendment) Bill 2019, which seeks to give Indian citizenship to non-Muslim refugees from Pakistan, Bangladesh and Afghanistan, was passed in the Lok Sabha on Monday midnight though it was vehemently opposed by the major opposition parties which described it as "anti-Muslim".

However, the government rejected the opposition's claims, saying the Bill does not affect the Muslim community residing in the country.

The draft legislation was passed after division of votes with 311 in its favour and 80 against it, following a marathon debate which continued till 12.06 am on Tuesday after beginning at about 4 pm on Monday (9 December). A total of 48 Parliamentarians took part in the debate.

The Bill would now be moved in the Rajya Sabha on Wednesday to cross its final hurdle before becoming a law to provide Indian nationality to Hindus, Christians, Sikhs, Parsis, Jains and Buddhists fleeing persecution in Pakistan, Afghanistan and Bangladesh.