Stipend Hike: Centre Bows To IIT, IISc Researchers’ Demands; To Constitute A Committee To Look Into Their Concerns 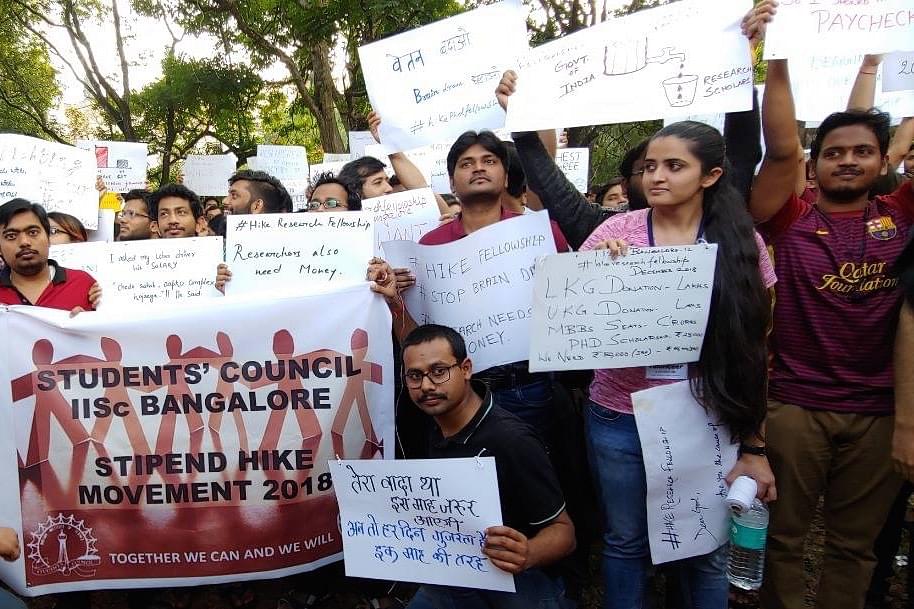 The DST (Department of Science and Technology) has finally announced the setting up of a new committee that will ensure smooth and regular disbursal of stipends and revision of fellowship funds. The decision comes after 400 research scholars held a silent placard protest outside the DST’s office in New Delhi on Friday (December 21), reports Indian Express.

Over 40 scholars across Indian educational institutions like IITs and IISc also went on a day-long fast on December 21, and others ran a social media campaign with the hashtag #HikeResearchFellowship. Over 5,000 signatures were sent to the PMO, DST, UGC and MHRD by the research scholars apart from 400 postcards that stated students’ demands.

The demands include doubling their stipends (Rs 25,00 to Rs 50,00 for JRF and Rs 28,000 to 56,000 for SRF scholars), timely disbursal of funds and an annual inflation-based increment on their stipends.

DST secretary Ashutosh Sharma and advisor/scientist A Mukhopadhyay met the research scholars and assured them that their stipend would be eventually increased with a notification issued in the same regard.

The DST officials said they would constitute a new committee which will look after timely disbursal of research funds and also increase the stipend on a regular basis. MHRD Secretary, R Subrahmanyam, said the DST would probably raise the matter in the Cabinet, with the HRD Ministry complying with the DST’s decision.

IISc students council chairperson Vivek Sharma stated that they trusted the government but won't compromise on their demands. IIT-D research scholar Vickey Nandal said if their requirements were not met by mid-January, they would hold an even more massive protest.