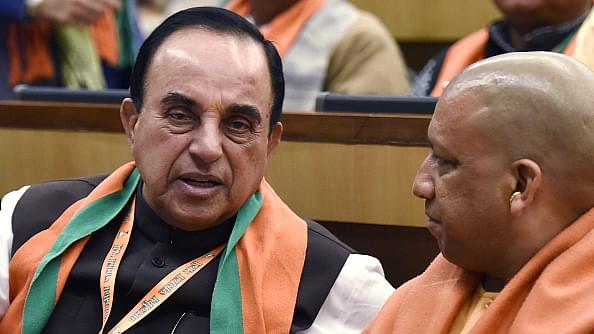 Dr. Swamy, who is currently in United Kingdom to attend a conference, tweeted that “Yogi Adityanath as CM is the best answer to UP people's prayer for a bright future”.

Yesterday, the BJP named Yogi Adityanath as the next Uttar Pradesh Chief Minister while Keshav Prasad Maurya and Dinesh Sharma were appointed as the deputy chief ministers of the state. The oath taking ceremony would take place at 2:15 p.m. today in Uttar Pradesh in the presence of Prime Minister Narendra Modi and BJP president Amit Shah.

Adityanath, a five-time MP from the Gorakhpur constituency, was the youngest member of the 12th Lok Sabha at the age of 26. Currently, Adityanath serves as the Mahant of Guru Gorakhnath Temple in Gorakhpur, following the death of Mahanth Aavaidyanath on September 12, 2014.