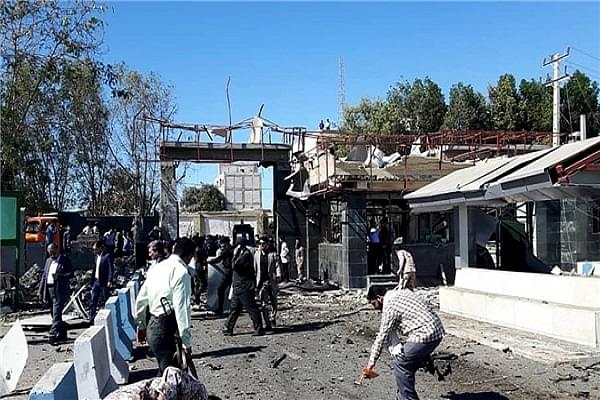 A view of the aftermath of the bombing at the attack site in Chabahar. (Photo by Fars News Agency)

At least three people are believed to have been killed and up to 24 others injured in a suicide car bombing in Iran’s southern port city of Chabahar today (6 December), as per Iranian State media, reports The Economic Times. Iranian television reports also showed apparent scenes of shooting in the area.

Chabahar is located in the south-eastern province of Sistan-Baluchestan, where Sunni Baloch tribes form a majority of the population, a rarity in Shia-majority Iran. The province has witnessed sporadic violence orchestrated by drug-smugglers, Sunni fundamentalists and separatist outfits.

Out of the three killed, two were police officers, as per Deputy Governor for Security Affairs Mohammad Hadi Marashi.

A previous suicide bombing in 2010 had killed 28 people at a Shia mosque in Chabahar. A Salafist-Jihadist group Jaish al-Adl (‘Army of Justice’) had in October this year kidnapped 12 Iranian border guards in the same province.

The Iranian government generally alleges that these extremist groups are backed by its arch-rival Saudi Arabia and the United States, which Iranian leaders refer to as ‘The Great Satan’.

Chabahar is of vital importance to India’s geostrategic and economic interests, as $21 billion dollars worth of Memorandums of Understanding (MoUs) have been signed between India, Iran and Afghanistan to develop the city’s port as part of the Chabahar-Hajigak corridor, which will allow India a crucial passage to Afghanistan, and by extension, Central Asia.