Supreme Court Sets A ‘Muhurat’ For Bursting Fireworks: Allows A Cracking Diwali In Delhi Between 8-10 PM 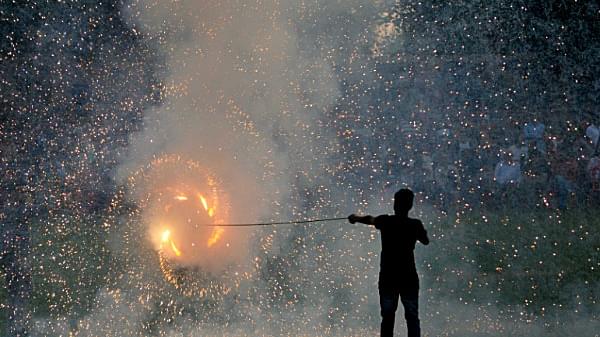 A view of firecrackers show during celebrations. (Nitin Kanotra/Hindustan Times via Getty Images)

The SC has refused to impose a nationwide ban on crackers by allowing the use of green crackers, which are supposedly less polluting. The verdict, which comes 15 days ahead of Diwali, is in response to a plea seeking a ban on the manufacturing and sale of firecrackers across the country to curb air pollution.

Firecrackers bursting in front of the Supreme Court to protest ban on them.
[Whatsapp Forward] pic.twitter.com/v8wn5orQkY

Post the verdict, SC announced the conditions under which the firecrackers can be sold and used. According to reports by NDTV,

Bursting of crackers allowed only in community areas: Only designated community areas in Delhi-NCR identified by Central Pollution Control Board will be allowed for bursting.

Timings for bursting crackers across India during festivals: Supreme Court allows bursting of crackers on Diwali from 8 PM to 10 PM. On Christmas and New Year, from 11:55 PM to 12:30 AM.

The aforementioned were key highlights of the SC verdict.

After the delivery of the verdict, members of an outfit ‘Azad Hind Fauj’ staged a protest outside the premises of the Supreme Court by bursting firecrackers. According to reports by News 18, “Fourteen people, including three women, have been detained by the police and were taken to the Tilak Marg police station. The members, who claimed to be from an outfit called the Azad Hind Fauj, were led by a man named Satpal Malhotra.”