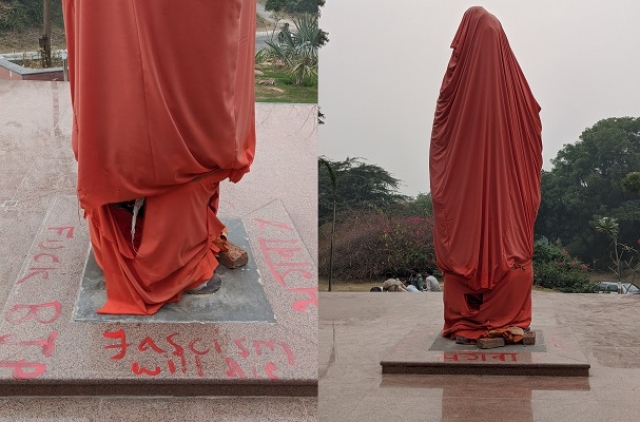 The statue of Swami Vivekananda in JNU. (Pic via Twitter)

Delhi police received a complaint on Saturday against unknown Jawaharlal Nehru University students for allegedly vandalising and defacing Swami Vivekananda's statue on the varsity campus on 14 November. The statue was planned for unveiling in January next year.

The complaint, received by Vasant Kunj North police station, is being examined by senior officers so that they can take a decision whether to file a case, sources said. "We are examining the merits of the complaint," said a senior IPS officer, adding a decision will be taken very soon.

The complaint is filed by Buddha Singh, the Chairperson of Swami Vivekananda Statue Installation Committee of JNU. He has asked the police to register an FIR under Section 426 (punishment for mischief) and other relevant sections of Indian Penal Code and under relevant provisions of Prevention of Damage to Public Property Act, 1984.

The statue is located within the Administrative Block and was installed on 5 January this year to pay homage to Swami Vivekananda. The statue has not been unveiled and is covered with a cloth.

He said the incident took place between 4 am and 6 am on 14 November.

He stated the objectionable messages had political remarks written on the base of the statue. "These messages are particularly directed towards a political party and a group of people donning saffron clothes. The said messages are also obscene in nature," he said in the complaint.

The complainant also said that after careful examination, it is evident that attempts were also made to tamper with the statue as the cloth with which the bust was covered was torn off.

"The vandalism of Swami Vivekananda's statue is a shameful act committed by some miscreants in furtherance of their political agenda. The statue as a symbol of peace and harmony has been vandalised by people filled with hatred and disrespect," Singh said.

He stressed that Swami Vivekananda stands as a role model for the youth and has inspired millions of minds. He said that it is "just not an attack on Swami's ideologies but also on aspect of Indian identity".

Since 28 October, JNU has been witnessing protests from students for certain reasons, including the fee hike. These protests took a turn for the worse after students allegedly confined JNU officials and defaced the JNU property.

Between 28 October and 14 November, the protesting students have also vandalised and defaced the administrative block by writing objectionable and obscene messages on walls and doors.

The complainant also alleged several students are planning to tamper with the statue. "The JNU security officials have in their possession certain messages that indicate the same," Singh alleged.